“The Mummy Returns: A Film by Kanley Stubrick” a Book Review by Christopher Nelms 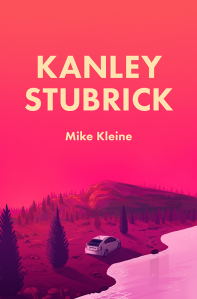 Fresh off the success of I Hate the Internet, Jarrett Kobek’s press, We Heard You Like Books, has released Kanley Stubrick by Mike Kleine, a novella written in a resemblance of verse which slightly resembles prose without cons but mostly resembles resembling. I’ll give it to you straight, like a sparkling glass of dry pear cider: Kanley Stubrick is one of the kinkiest pieces of “weird fiction” I’ve read in the years I’ve felt were years, and I’m not talking about the curl of its hair like sneers, though it is profoundly pubic in the way it has been made, thankfully, public, like an uncanny valley, fuel to fossil-fools.

On the surface, Kanley Stubrick (hereafter, KS) is a dyslexic ode to Paxil-flatlined channelsurfing, Waterworld-waterboarding, Ambien-ambient affect, & the banal catechisms of mildly curious cohabiting partners, but look closer: you will see it is, in wacktuality, an ultimate species of revenge tragedy, in the Grand Guignol-tradition of The Duchess of Malfi, Freudian psychoanalysis, Golden Girls, and the Bill Kill diptych of legendary American film-cosmetologist. Tintin Quarantino.

Caution: there are spoilers ahead, but only in the plot which imbricates, imprecates, and eventually bowdlerizes all human life onto the cutting-room floor of soiled Macguffins, the compost from which all plots flower into parasites for their parasites.

Playing with popular YA-dystopian tropes, KS gets the plot rolling with a pair of stolen (?) shoes, about which inquiries must be made via a device which enables disembodied communication on a global scale. Soon, it becomes quite clear how we must think of “shoes” in this world. Shoes have soles and you put them on your feet to protect them from harm, and also to make walking easier, faster, to increase the productivity of this slowest and, sadly, most common of all human forms of locomotion (excepting crawling, a form of locomotion whose inefficiency, neoliberal capitalism, with its ravenous emphasis on the bottom-line, has shamed, made undignified for humans of age to not participate in the myth of standing on their own two feet, proud & upright, pulled up by their own bootstraps).

Now, Stanley Kubrick, unlike Halfred Aitchcock, is not commonly known for his use of Macguffins to get the plot rolling, like dung beetles, in his films, but, I would argue, Kubrick is an even greater practitioner of the Macguffin than Aitchcock or Quarantino. Dispensing with Macguffins in his films, Stanley Kubrick created a single overarching Macguffin to drive the plot of his career, legacy & critical reception: namely, that he was a genius. Armed with this insight, we can return to KS’s rather disarming Macguffin: the allegedly stolen shoes which belong to the narrator’s cohabiting partner. It has been established shoes are for feet, feet are on legs, legs are for walking under a regime of global capitalism which only allows global, disembodied verbal communication via device as a way to improve the efficiency of biopoliticized bodies ashamed to crawl, etc. We also say an “argument has legs,” when it seems to get somewhere, and legs are obviously the argument a legacy makes; legs move through an argument with space as legacy moves through an argument with time. As a man walks to the other side of town to testify of his presence by being present on the other side of town, the pyramids of Egypt walk to the other end of history, even their ruins testimony to their presence.  Only the profit-motive of prophet-motives didn’t let them crawl to nowhere.

With airtight logic, Kleine spins his plot from out of WW1 aeroplane documentaries and missing shoes until somehow we get to volcanoes & Stanley Kubrick. It is an airtight plot that ends like the moon, like all plots, with nothing left alive to sense. Just as volcanoes burn all oxygen away from them, just as Kubrick faked the moonlanding in an airtight plot to mask the moonlanding didn’t occur because the moon was airtight, the plot of KS burns with scrupulous logic, creating an airtight vacuum which nonsense like vampires or tardigrades can live swimmingly in.

Fuck a vampire though, this ain’t that kind of YA junk. Like the Beatles, Trix, and crushing trauma, vampires are for kids. The literary monster which best figures the contemporary world is quite obviously the mummy, a dead aristocrat woken by a meddling, Orientalizing, white-chocolate-Academia-nut cookie-cutter colonialist, come to shuffling, stumbling half-life amid halls of useless wealth, where the writing is literally on the wall. Like a newborn baby, the mummy’s mission, once brought to half-life, is simple: take revenge upon those who disturbed its ancient sleep of nothingness so it may return to the nothingness from whence it came, and in the meantime, “magical means” shall empirically provide a reason for that nonsensical mission to occur.

There are no mummies in KS, at least that I remember. I read it twice, both times a few months ago and each time I was amazed at how much the book wanted you to forget it, eating itself out of house and home into the desert of the spill, dyslexhurt of the Spleeven Stillberg. KS is a book which is a mummy which uses its own wrapping for toilet paper, capturing what it feels like to be on social media, watching an endless scrollwork of hieroglyphs hook up to each other human-centipede-style, an eternal feast of previously embalmed and digested thoughts being passed down a butt-stuff chain of command like wisdom, from mummymaw to mummyhole to mummymaw to mummyhole, intestinally diluted, liked, and shared. Kanley Stubrick, much like the misprisioned film director referenced in its title, is a mistake only in a magical world that thinks something as supernatural as a mistake could exist.

Kleine creates a utopia in KS where you don’t have to slouch with the indignity of enforced dignity, where the alimony of innocents pisses clowns, and the second cumming crawls, ouching towards Bethlehem’s please-bittered bitte, l’chaim. Stanley Kubrick sphinxes Oedipus with riddles of His Emperor’s New Shoelessness & Freud goes beyond the pleasure principle wearing Stanley’s borrowed, battered genius-macguffin-shoes, a pair of plastic knockoff Crocs melting into the Bedouin sands of human history as if they were Madame Tussaud’s wax Walter White impersonating Shelley’s impersonation of history’s impersonation of Ozymandias. Aeroplanes invented by ancient aliens buzz and strafe all founding fathers, even Cary Grant, and Mt Rushmore gets stoned to death for adultery, it’s burial shroud a gigantic Kaepernick jersey made of gold, arsenic, and old lace, a pledgeless negligee of star-mangled banter to a new world order of an airy B&B-world without boarders. Onward history channels, impotable but surfable.

The moral lesson of Kanley Stubrick would be unimpeachable if it held office: That revenge is a wish best heard tolled. Let the pyramid of the contemporary world shake with the #woke death-rattle of embalmed culture. Let the bells of your phone’s alarm clock warn you into the danger of another dawn, the orange clockwork of a dying sun. Be like the scarab, producer & eater of dung, a holy-roller of eyes-wide shit, sacred as perennial floods and divine bovinity. The world is a wax museum and the hopes of its inhabitants guttering wicks. Let Earth melt into a hot puddle, tilt on its axis, and pour its molten smelt in a last gasp of trite kink upon the obsidian silk skin of necrophiled space. Be the nothing you want to be in the world.

In short, I liked this book from We Heard You Like Books like I like my moss-piglets, mummified but woke, extremophilic, and ready to take meaningless, gleeful revenge on the Empire’s archaeologists. But like Levar Burton used to get paid to say: you don’t have to take my word for it.

Christopher Nelms is a scribbler living in Athens, GA. His forthcoming self-help book, Take Yourself Out and Someone Else With You: A Terrorist’s Guide To Dating, will be coming to a dustbin near you in June 2017.

This entry was posted in Uncategorized. Bookmark the permalink.