Different From the Others: LGBT History Month and the Almost Century-Old Legacy of an Early Gay Rights Film

Different From the Others:

of an Early Gay Rights Film

October is LGBT History Month, and this year it is as important as ever to study our past. With all of our recently won civil rights and our dramatically increased visibility in society, the LGBT community sometimes assumes that the features of our culture and the values of our politics are recent inventions. Conversely, sometimes we make the opposite mistake and assume that LGBT people of the past (even before the terms gay, lesbian, bisexual, and transgender first came about) thought of themselves and the community exactly as we do today. These misconceptions are primarily due to the fact that American culture has closeted LGBT history for so long. We learned little to nothing about the history of the LGBT community in school and have thus been denied the benefit that comes with studying history or even being aware that we have a history. I remember, as a teenager, reading gay poet A E Housman in my English textbook, not knowing that his poems written about his male “friends” were actually addressed to the men he loved romantically. It was more important for those who created the curriculum and standards for our education to lead us into misunderstanding the material than to risk admitting to young people that men could love other men in the 19th century or today for that matter.

Having a history is an essential part of having a cultural identity. A history explains where we are in the present and allows us greater insight into the direction in which we are heading. It reminds us that ideas, values, and expressions do not materialize out of nothing; they are the product of the collective communal action of the people over time. This history is always evolving and our story is never finished being told because we are constantly discovering more about it. Finally, knowing our history cautions us against the uncritical belief in a progress narrative. It is easy to assume that we live in the most civilized and enlightened of times and that progress inevitably arcs toward justice. In reality, civil rights are often a cycle of advancement and blow back. Social action is usually greeted by an even greater and opposite repressive reaction. We cannot afford to presume that our current social standing is permanent or that it will naturally improve in the future.

This insight that studying LGBT History grants us is featured in the first film to seriously discuss LGBT identity, Anders Als die Andern, (Different From the Others) made in Germany in 1919. Directed by Richard Oswald and co-written by and co-starring legendary sexologist Magnus Hirschfeld, the silent film tells the story of a music teacher in love with an adult student. He falls victim to blackmail and in despair, he looks for answers. A quack offers a cure through hypnotherapy, but when that fails, he seeks out Dr. Hirschfeld’s advice. Hirschfeld assures him that his inclinations are normal and that it is not homosexuality that is shameful, but rather, it is our intolerant society that deserves scrutiny. I don’t want to go too far into the plot because I would rather you watch it for yourself.

One reason why this film is an important part of our cultural legacy is that it reminds us that many of the same basic issues we confront today were part of the same struggle 100 years ago. Grappling with a culturally enforced notion of “difference,” dealing with the disproportionate rate of depression and suicide among LGBT people, and finding access to queer friendly counsel and health care are still difficult parts of the coming out process. Yet, much has changed since Hirschfeld’s time. The idea of sexuality as distinct from gender identity was still evolving. Most psychologists still subscribed to the inversion model of the homosexual man as “a woman on the inside” and a homosexual woman as a “man on the inside.” Hirschfeld himself proposed the idea of the homosexual as a “third sex,” though he later revised that idea after further work with his associates.

Furthermore, seeing Magnus Hirschfeld on screen as a living person reminds us of the pioneering work he did in helping to lead the first modern LGBT rights movement in Germany at the turn of the century. He founded one of the first advocacy groups, The Scientific Humanitarian Committee, and The Institute for Sexual Research.  The institute was a safe space for LGBT people that attracted individuals from all over the world, thus helping to synergize diverse queer thought and expression at an early stage of the LGBT community’s formation. The Amazon series Transparent poignantly depicted this in their second season. He also edited one of the first regularly published journals devoted to printing scientific research on gender and sexuality and to advocating for rights and tolerance.

Hirschfeld and his associates’ main target was Paragraph 175, a law dating back to 1871 that criminalized homosexual conduct. This same law remained in place when Hitler and the Nazis took power in 1933 and began to target homosexual men as the first in a long list of “degenerates” who would eventually be shipped to the concentration camps. This point connects back to my previous argument about how understanding LGBT history can help us avoid the progress myth and uncritically assume time by itself will eventually lead to equality. Many would not assume that just before Hitler’s ascension to power, Berlin was one of the most queer friendly places in the Western world. Along with Hirschfeld’s institute and the work of fellow advocates like Adolf Brand and Anna Rüling, Berlin’s nightlife and its famous cabarets offered queer individuals a space for exploring their identities. This was far from the glorified ideal that films like Cabaret made it out to be, but it still provided a destination where queer expression and thought could flourish.

As I said earlier, progress is often met with blow back. Queer visibility was associated with the kind of decadence and degeneracy that the Nazis blamed for Germany’s economic depression and humiliation in the aftermath of World War One. In just the span of one year, 1932  to 1933, the following happened:

This once well-known icon of the queer subculture became erased and was rebranded as a symbol of the all-encompassing power of Nazism. Magnus Hirschfeld and his institute soon became a target as well. On May 6, 1933, the Nazis raided Hirschfeld’s institute and a few days later, burned its books in a public bonfire. As German poet Heinrich Heine wrote in the 19th century, “Where they burn books, they will also ultimately burn people.” In a few years, this became true as queer patrons of the institute were among the first shipped to the concentration camps. 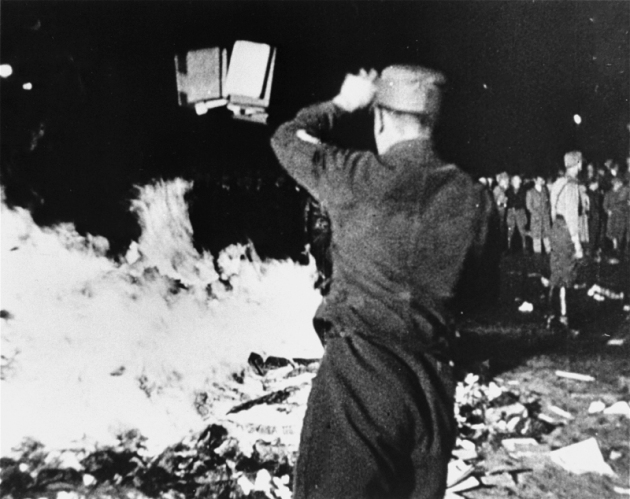 It would be a gross hyperbole to suggest that our present day is similar to Germany in the 1930s; however, we sometimes need stark reminders to keep us alert and aware. With recent threats to remove transgender people from the military, the push for the right to discriminate on the grounds of religious beliefs, and the continued hostility toward the issue of transgender people in restrooms, it is important to keep our relative precarity in perspective. We are always at risk of losing what we have gained. I bring this up so that we are aware of how a change in national leadership can drastically alter how we document and teach LGBT history. In the span of a year, the federal government went from honoring LGBT history through making Stonewall a monument to attempting to distance itself from recognizing the monument at all at its flag raising ceremony.

I do not mean to argue for an equivalence between the Nazi persecution of LGBT people and the federal government’s recent reluctance to honor LGBT history. These are entirely different circumstances. Broad generalizations trivialize the past and only serve to keep us from understanding the nuances of present day problems. This is more about the politics of history and how recognizing a history amounts to recognizing a community and ensuring a place for it in the nation. It is my hope that the federal government continues to acknowledge and preserve Stonewall as it has intended to. However, if the plan is to shove our history back into the closet, then we must renew our efforts to not only preserve our history, but to dig more of our heritage out of the archives and place it in the public spotlight.

Chase Dimock is the Managing Editor of As It Ought To Be. He holds a PhD in Comparative Literature from the University of Illinois and his scholarship has appeared in  College Literature, Western American Literature, and numerous edited anthologies. His works of literary criticism have appeared in Mayday Magazine, The Lambda Literary Review, Modern American Poetry, and Dissertation Reviews.

Chase Dimock teaches Literature and Writing at College of the Canyons. He is the Managing Editor of As It Ought To Be Magazine.
View all posts by Chase Dimock →
This entry was posted in Chase Dimock and tagged Anders Als die Andern, Different From the Others, Gay Cinema, Germany, lgbt, LGBT Film, LGBT History, LGBT Rights, Magnus Hirschfeld, Nazis. Bookmark the permalink.