As It Ought To Be Announces New Managing Editor

Posted on August 1, 2017 by Sivan Butler-Rotholz 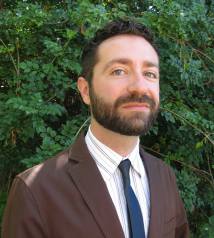 We here at As It Ought To Be are honored to announce that Chase Dimock will be assuming the role of Managing Editor. We suffered a great loss this spring with the passing of Okla Elliot, our Managing Editor of ten years. We know that Okla’s are no small shoes to fill, and so it was with careful consideration that we selected Chase for this role. Chase was a comrade of Okla’s who has Okla to thank for inspiring his writing and publishing. Having been championed by Okla as a writer is an experience so many of us in today’s literary world share, and so this succession is a nod to a man whose greatest legacy, in Chase’s words, “will be how he delighted in providing a forum for others to articulate their voices.” We know in no uncertain terms that Okla would have wanted AIOTB not only to live on but to thrive, and we know of no one Okla would have been happier to pass this torch to than Chase.

Chase Dimock is an English Professor at College of the Canyons in Santa Clarita, California. He holds a PhD in Comparative Literature from the University of Illinois Urbana-Champaign. His scholarly interests include queer studies and transnational modernist literatures. Chase’s research has been published in the journals College Literature and Western American Literature and he has written chapters about modern and contemporary authors for academic books on subjects such as American writers in Paris, Black Existentialism, and German Women writers. His literary criticism has been published in online venues including The Lambda Literary Review, Modern American Poetry, and Dissertation Reviews. He has previously worked as an editorial assistant on MAYDAY MAGAZINE, Oxford’s Anthology of Modern American Poetry and Approaches to Kurban Said’s Ali and Nino.

Chase is eager to roll up his sleeves and help AIOTB thrive. To that end, he is actively soliciting contributions to the magazine, and welcomes submissions via email at inquiries.asitoughttobe@gmail.com. We look forward to this next chapter, and to sharing our passion as readers and writers.

Sivan is the Managing Editor of the Saturday Poetry Series on As It Ought To Be and holds an MFA from Brooklyn College. She is a professor, writer, editor, comic artist, and attorney emerita. She is also the founder of Reviving Herstory. Sivan welcomes feedback, poetry submissions, and solicitations of her writing via email at sivan.sf [at] gmail [dot] com.
View all posts by Sivan Butler-Rotholz →
This entry was posted in Chase Dimock and tagged Chase Dimock. Bookmark the permalink.