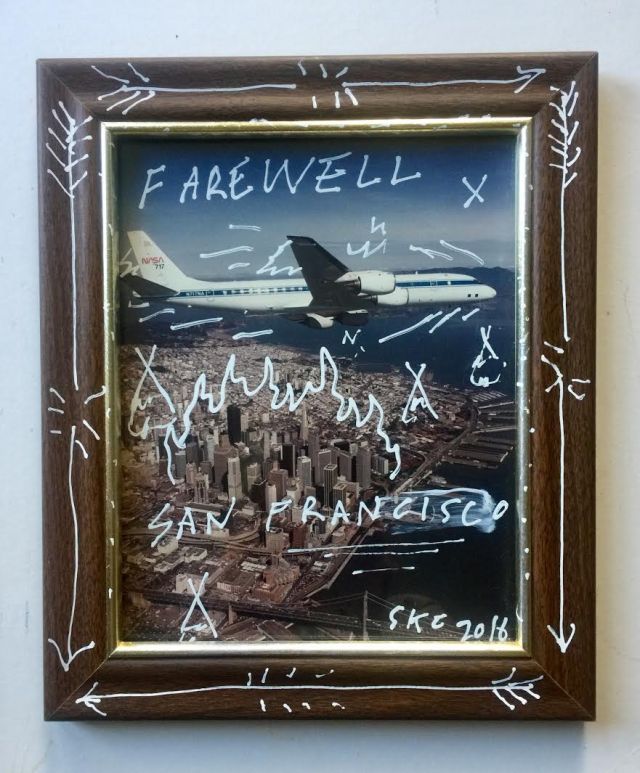 Spencer Keeton Cunningham has been on the road for the last 28 months, but is back in San Francisco for a send-off show at Heron Arts, “Farewell San Francisco: A 12 Year Retrospective”. The exhibit, which ran from October 8 to 30, 2016, presented work from the last dozen years, including pieces made before he attended the San Francisco Art Institute. Facing eviction and escaping a mold-ridden Western Addition apartment, Cunningham is preparing to join Sioux and other Native American activists opposing the Dakota Access pipeline at the Standing Rock Reservation in North Dakota. Surprisingly, after over a decade in San Francisco, this is Cunningham’s first solo show in the city.

The breadth of work is impressive. Works on paper, paintings, ceramic sculpture, installation, and photography. The themes running through the work focus on gentrification, skateboard culture, environmental degradation, contemporary native identity, endangered species, and most importantly, indigenous people’s rights. Wall to ceiling artworks filled with iconography comprising his own visual language fill the 4,000 sq foot space, with some paintings measuring as large as 77 x 77 inches. 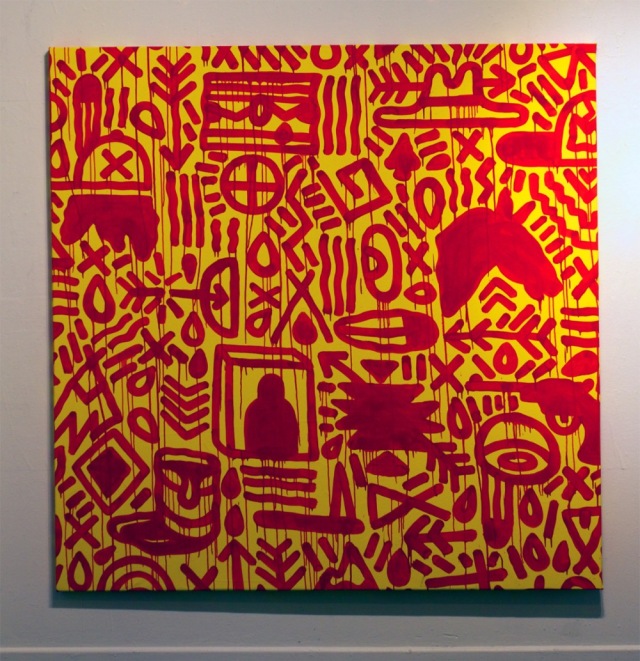 While Cunningham says goodbye, he hasn’t actually been anchored in San Francisco for some time. Yes, he has strong ties to San Francisco, but he is now a global artist having travelled and painted murals in Mexico, New Zealand, Japan, China, Tasmania, Australia, Cuba, The Netherlands, Canada (British Columbia and the Yukon), Hong Kong, Argentina, and various cities in the United States. The departure from San Francisco is real, yet somehow more symbolic than anything else. It provides a historic moment to present a cohesive body of work that is long overdue for exposure and appraisal. 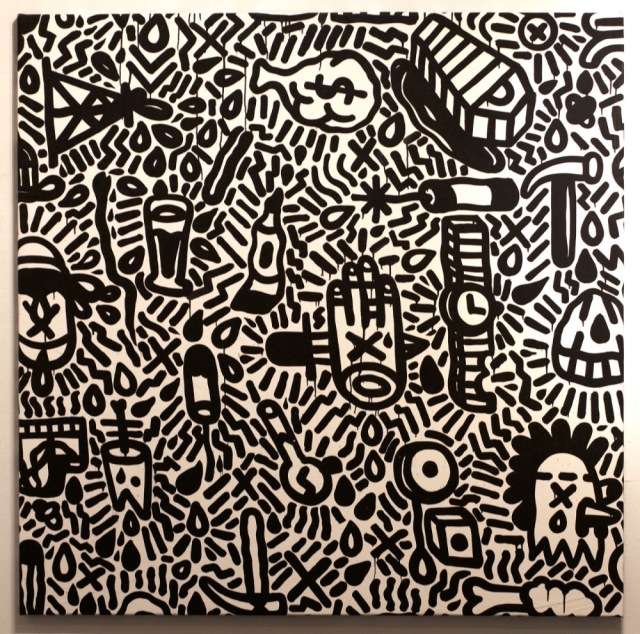 There is a simple mark-making element in the works, Lascaux-like, yet seemingly very modern. Cunningham utilizes a Keith Haring-esque line in many of the works, an obvious homage, and cartoony renderings suggesting childhood influences (Mickey Mouse and Mighty Mouse cartoons among them), and drawings reminiscent of the Mission School. The combination, particularly in terms of subject matter, are his own however. Cunningham’s imagery captures the political immediacy of contemporary issues, such as artificial nation-state borders, our society’s fascination with sports and pop culture, his on the road lifestyle, and a critique of capitalism, particularly oil production and tech gentrification. Regarding Keith Haring’s influence, it is worth noting that Cunningham painted a mural over 20 advertising billboards, in support of aboriginal rights, in Melbourne next to a mural Haring painted in 1984.

A kind of semiotics is at play in these works, as Cunningham embeds meaning in symbols and asks the viewer to contemplate their striped down meanings. Depictions of oil rigs, sports helmets, dollar signs, a microphone referencing Hip Hop culture, teepees, chicken wings, tomahawks, feathers, paint cans, knives, pizza slices, envelopes, wavy arrows, a wagon on fire, a glass beaker referencing drug manufacturing, WiFi symbols, broken glasses and pencils, and the rendering of sacred animals like horses and coyotes, all litter the art works. Also notable are a triangle in a bowl, which evokes shark fin soup, and logs burning inside of a computer, in reference to the progress of technology. All of these comprise a personal hieroglyphics. The marks have a deeply embedded context that cross language and cultural boundaries, allowing the reader to visually read meaning in the work. 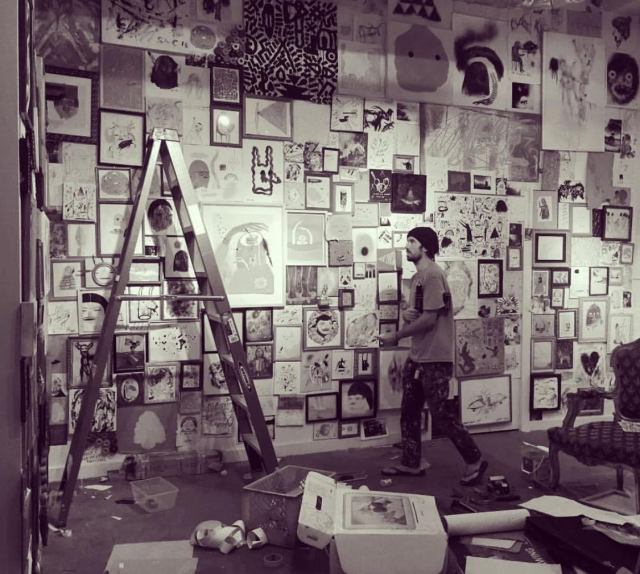 Photo of Spencer Keeton Cunningham taken during the installation at Heron Arts.

The line work itself is often rendered as a flat, two-dimensional image. He uses black paint on a white canvas or saturated colors against a colored background, and outlines many of the symbols he paints with thick brush work, suggesting emphasis and a kind of kinetic movement, even reverberation. There isn’t any text based messaging in the large paintings; he doesn’t need it, given the force of the symbols he employs.

In one grouping of paintings, most of them 52 x 52 inches, including “Gentrification of a Pharaoh” and “Gentrification of Indian Land”, Cunningham deftly layers the painting surface, in effect, making three separate paintings. The triple-layered symbols move from lighter colors (yellow and green in one instance), to a confident black acrylic on the top surface. These works convey gentrification by suggesting a deeper presence of meaning beneath the surface layer of things. In effect, Cunningham proclaims that gentrification and displacement doesn’t erase what stood before just by adding a fresh coat of paint. 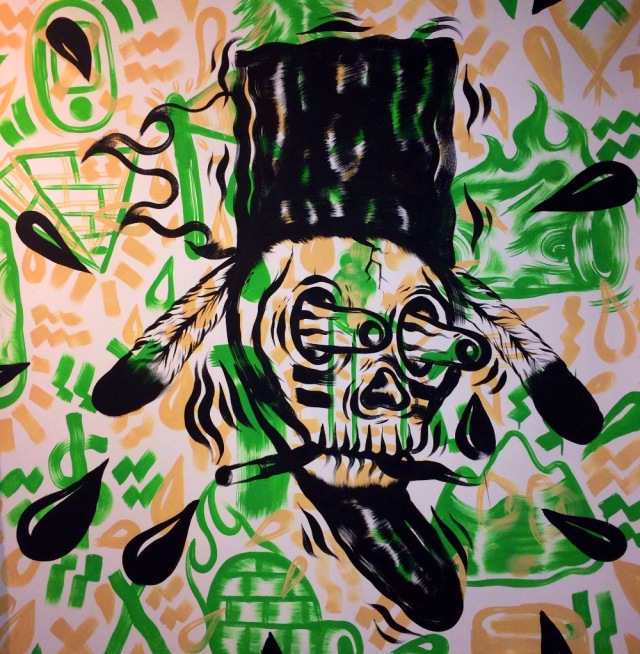 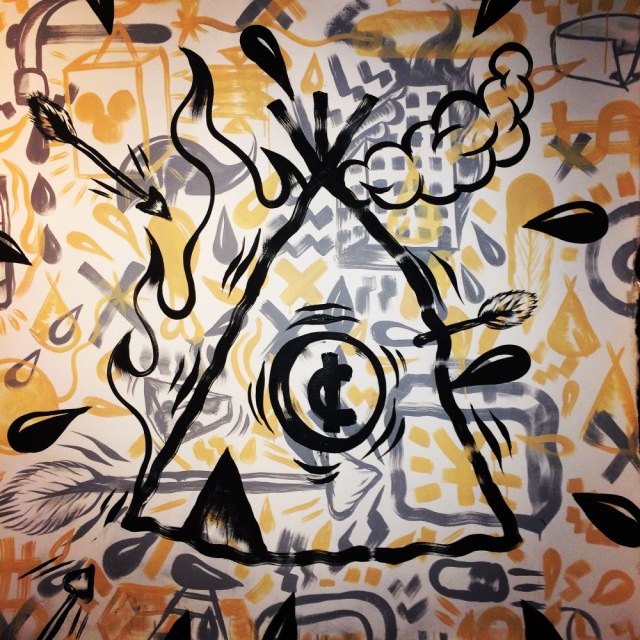 One wall is devoted to his close collaborator Haitian-American artist Erlin Geffrard who is known for presenting racially-charged work (under the aka Kool Kid Kreyola), including appropriations of the KKK moniker and clansman hood, which he once wore in a pop-up performance at the SFMoMA. Geffrard’s wife, Daisy Ortiz, and 4-year old child Daylin also contribute to the wall with their own drawings and ceramic artwork, now comprising artifacts of a heart-wrenching story of family displacement.

During the closing reception Cunningham erected a teepee in the middle of Heron Arts, something he had done previously at group shows in the Diego Rivera Gallery at SFAI and at the Luggage Store Gallery. Significantly, he made the current structure contemporaneously with the unrest at Standing Rock, during which time police and security guards were using tasers, rubber bullets, and pepper spray against native people as they were evicted from their make-shift campground. Notably, artists and native activists protesting the Dakota Access pipeline (including sometime collaborator Richard Bluecloud Castaneda) were sending real time messages to Cunningham as he offered his performance/installation in San Francisco, thus linking disparate tales of displacement and unrest. 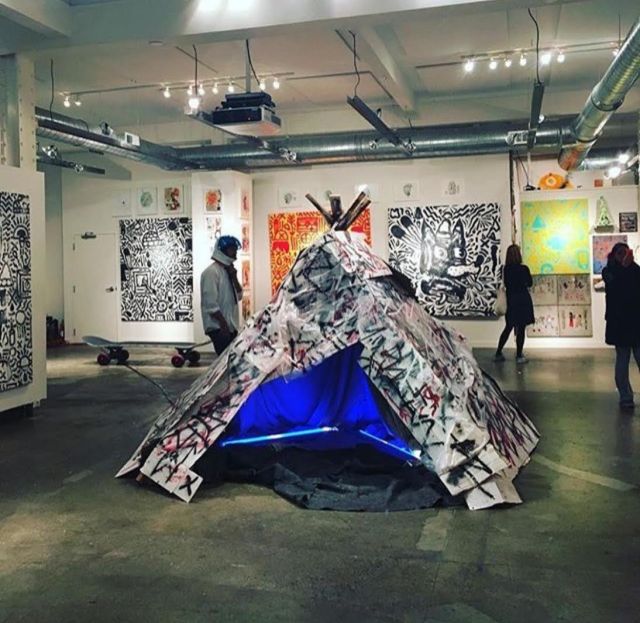 The teepee, made of plastic and cardboard, had a ramshackle quality referencing homeless structures throughout cities in the United States. The construction materials resemble trash, signifying the prevalence of pollution. The teepee itself was painted in fresh red/purple acrylic paint, still wet to denote fresh bleeding and suffering. An eagle pattern on the teepee itself was split by dollar signs and splatters of paint. Cunningham added LED lights to adorn the inside of the structure, which conveyed a futuristic element and respite from the chaos. The neon element also functioned in dialogue with the faux space helmet that Cunningham wore during the reception, as he cruised around the exhibition floor space on a 9-foot skateboard made by Payson McNett. 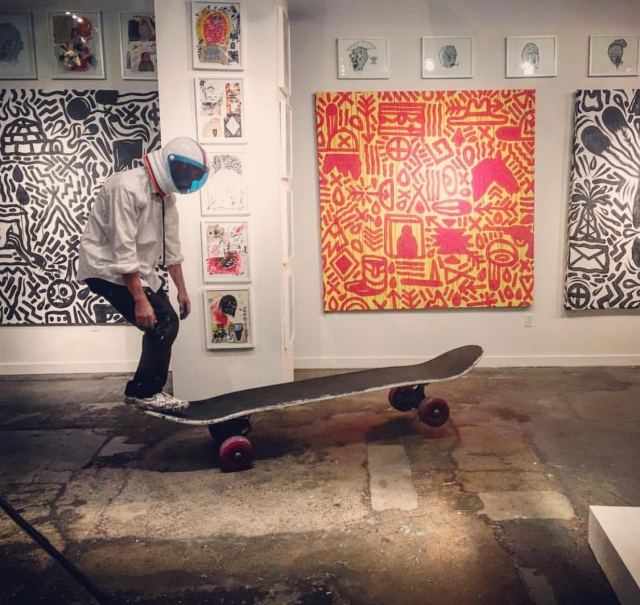 Hovering nearby his teepee, Cunningham placed his painting “Made In Outerspace” , which posed the question of the role technology plays in our contemporary challenges. It’s worth noting that Cunningham is from the Colville Tribe which is one of 12 tribes of the Confederated Tribes of the Colville Indian Reservation in Northeastern Washington. His blood quantum is 1/4th and he affiliates himself as mixed Native and European heritage. Cunningham’s Native-American ancestors knew something about displacement and he poignantly suggests that the next frontier may be where they will finally find a peaceful home. Cunningham is already dressed like an astronaut, as if in anticipation. 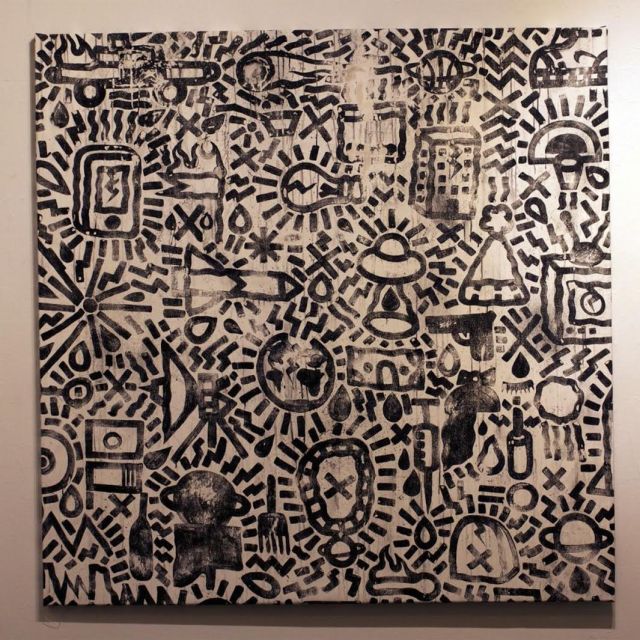 The quickly put-together show, drawn out of necessity and quick planning, meant that it didn’t receive the promotion and attention it deserved. The gallery was open by appointment only. This important exhibition will nevertheless live through photographs and the memory of the few who experienced it. It’s message and the work itself remains vital, as well as sadly relevant. 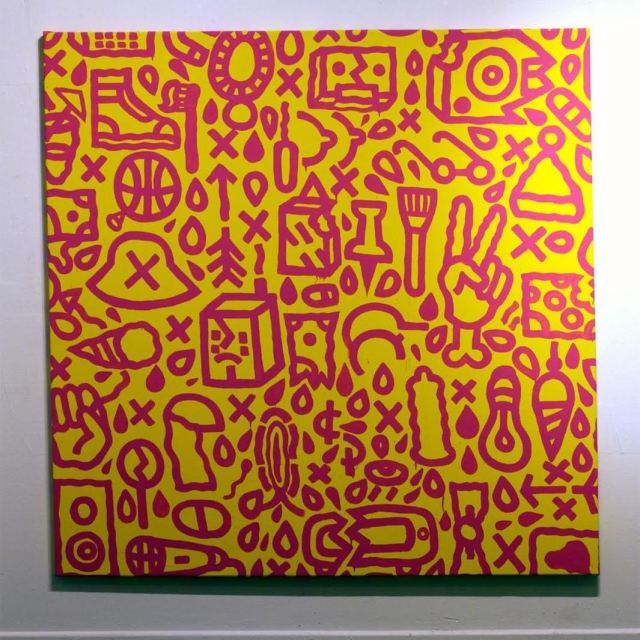