Posted on November 21, 2015 by Sivan Butler-Rotholz 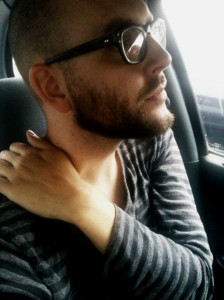 
My eyes
are so green that when

I look at you, your face
becomes an emerald,

or like a meadow
that is so completely absorbed

in its color that
it catches in your throat.

Sometimes
the sky is so beautiful

that even the windows
are in awe,

not letting me
see it clearly.

Windows
built into us, into our limbs,

my feet have bricked wells
built into them,

Thus
I fall into myself.

Today’s poem was previously published in SHAMPOO, and appears here today with permission from the poet.

Derrick Tyson is a a Visual Artist/Poet currently residing in the Atlanta-area. He has been published in various online and printed magazines nationwide, and has several books of poetry out. As an artist, he has been exhibited internationally in four different countries (Israel, China, Australia and Italy) and has had many of his photographs published in online and printed magazines. He loves co-mingling, cross-pollinating Fine Art with his love of Poetics, Literature, World Cinema and the Oneiric. He refers to this as Visual Poetry. He believes that all things are interconnected, whether or not we can visually render the connections. Since “Time” is inelastic, he cherishes every second with a passion. He’s easily-amused and takes nothing for granted.

Editor’s Note: Today’s poem is full of moments of stunning, impactful surprise. In the instant of connection, is it the watcher or the watched who becomes transformed? How perfect the flower, created by the hand of science or Mother Nature, that it never needs alterations. How beautiful the sky that not even the transparency of windows will allow it to be truly seen. How deep or burdened we are, that we fall into ourselves? Built moment by moment, each its own deep thought, each its own discreet image, today’s poem asks us to slow down, to reflect, to envision and imagine and contemplate. There is layer upon layer to consider and play with, if we will open our minds and take the time.

Sivan is the Managing Editor of the Saturday Poetry Series on As It Ought To Be and holds an MFA from Brooklyn College. She is a professor, writer, editor, comic artist, and attorney emerita. She is also the founder of Reviving Herstory. Sivan welcomes feedback, poetry submissions, and solicitations of her writing via email at sivan.sf [at] gmail [dot] com.
View all posts by Sivan Butler-Rotholz →
This entry was posted in Derrick Tyson, Saturday Poetry, Saturday Poetry Series and tagged American Poetry, contemporary poetry, moves in contemporary poetry, Poetry, poetry review, poetry reviews. Bookmark the permalink.