Posted on October 24, 2015 by Sivan Butler-Rotholz 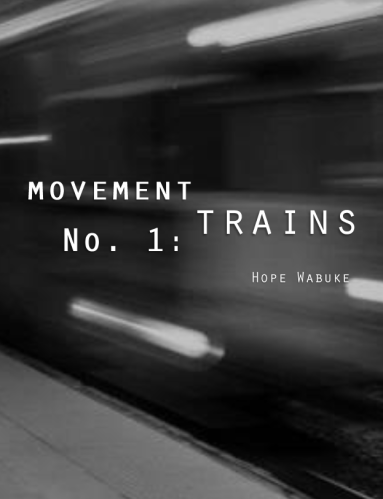 From MOVEMENT NO. 1: TRAINS
By Hope Wabuke:

and when she waits, knowing its coming by the movement of light
across rusted metal, the dirty white tiles of tunnel wall almost
beautiful in the light sliding closer through darkness, approaching
rumble and tearing, metal wheel against track, gears shifting; halt.

in the loud echo still, vibrations pulsing—the only thing. she
imagines the sound she hears is breathing.

it is only when she thinks of him that her body becomes soft; she is
so conscious, then, of the movement of his body pressed against
hers’. so now she slides slightly, left, right, with the swaying motions
of the car. the train is stopped on the bridge, a windy day. the
intercom voice presses through static and she lifts arms above head,
stretches out her body to touch fingertips light to metal pole in
aisle’s center. the violence of the train’s starting and picking up, of
speed. in the meeting of the many tiny bones in her wrist against the
cold hardness, in the press of fingers soft against metal pole. she is
understanding pain in increments of waves, the pulsing slow
softening in rhythm with the traincar, rocking—her body, pushed
backwards, against scratched plexiglass window.

and in the moment of the train’s descent underground, her last view
a mirrored body, lines like chain links against grey sky, grey water.
the shape of their structures, repeating, suspended: a half-circle, a
half-closed eye .

and on the day after his leaving. she notices his absence in the
awkward stillness of her legs, the way her arms hang stiffly at her
sides. this is when she will remember how, as he would touch
drumsticks to upside-down white buckets to make beats, she would
see sound touch tile in tunnel walls and touch heels to ground.
rocking upward in tiny motions, she would lift hands lightly; she
would move her body in tiny circles of his rhythm.

Today’s poems are from Movement No. 1: Trains, published by dancing girl press, copyright © 2015 by Hope Wabuke, and appear here today with permission from the poet.

Movement No. 1: Trains is a city symphony of New York, where the author lived for many years–the daily rhythm of riding the subway and dancing between people walking the streets. Blurring the lines between past and the present, these prose poems explore the movement between love, loss and longing in a young woman’s memory.


Hope Wabuke: Born in exile to Ugandan refugees, Hope Wabuke is a writer, essayist and poet based in California. Hope is a contributing editor for The Root and a contributing writer for the Kirkus Reviews. Her poetry has also appeared in Lit Hub, The North American Review, Potluck Magazine, Ruminate Magazine, Fjords Literary Journal, Salamander Literary Journal, NonBinary Review, JoINT Literary Journal, Weave Magazine, Cease Cows, Kalyani Magazine, Split this Rock and Literary Mama. Her essays and criticism have appeared in Newsweek’s The Daily Beast, Salon, Gawker, Guernica, Dame, The Root, Ozy, The Hairpin, Ms. Magazine online, The Rumpus, Los Angeles Magazine and The Feminist Wire. Her fiction has been featured in the anthology All About Skin. Her chapbook Movement No. 1: Trains was published in June 2015 by dancing girl press. Her second chapbook, The Leaving, will be published in 2016 by Akashic Press as part of Kwame Dawes and Chris Abani’s New Generation African Poets series.


Editor’s Note: Part train ride, part memory, Movement No. 1: Trains takes the reader on a journey through which narrative blends with past, history is distorted by the present, and the tracks of the mind become one with the train lines of the New York subway system. Disjointed in a halting motion that mirrors the jerky movements of an underground train, the sway and lurch of this collection is tempered by moments of clarity and thoughtful reflection: “she / imagines the sound she hears is breathing;” “it is only when she thinks of him that her body becomes soft;” “she / would move her body in tiny circles of his rhythm.”

Sivan is the Managing Editor of the Saturday Poetry Series on As It Ought To Be and holds an MFA from Brooklyn College. She is a professor, writer, editor, comic artist, and attorney emerita. She is also the founder of Reviving Herstory. Sivan welcomes feedback, poetry submissions, and solicitations of her writing via email at sivan.sf [at] gmail [dot] com.
View all posts by Sivan Butler-Rotholz →
This entry was posted in Hope Wabuke, Saturday Poetry, Saturday Poetry Series and tagged American Poetry, book-length poetry, contemporary poetry, Love Poetry, Narrative Poetry, nostalgic poetry, Poetry, poetry review, poetry reviews. Bookmark the permalink.