Posted on March 7, 2015 by Sivan Butler-Rotholz 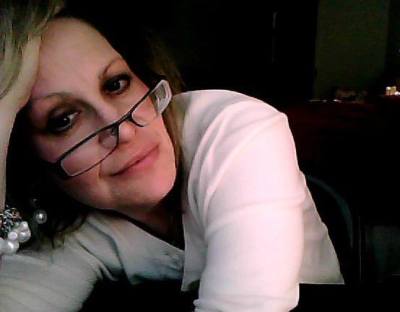 
THE BOOK OF ESTHER

That blush on my cheek?
It’s paint,
And I have glittered my eyes
And robed myself in the finery
of silk and gossamer,
lapis and gold–
And whored myself for your salvation.

You asked for no thoughts.
You merely offered my body
to the king–
My life forfeit
If my beauty failed.

You asked for no ideas
And I gave you none,
Though I had a thousand,
And ten thousand more.

Diplomacy was played on the field of my body,
The battle won in the curve of my hip
And the satin of my skin,
Fevered dreams of lust
And redemption.

That blush on my cheeks?
It is the stain of victory
And of my shame.


Today’s poem was originally published on Stumbling Towards Meaning and appears here today with permission from the poet.


Stacey Zisook Robinson is a single mom. She sings whenever she can. She writes, even when she can’t. She worked in Corporate America for a long time. Now she works at her writing and looks for God and grace, meaning, connection, and a perfect cup of coffee, not necessarily in that order. Stacey has been published in the Summer 2013 issue of Lilith Magazine and in several anthologies including The Hope (Menachem Creditor, ed) and In Transit (BorderTown Press, Daniel MacFadyen, ed). Watch for her book, Dancing in the Palm of God’s Hand, forthcoming from Hadasah Word Press. Stacey has recently launched a Poet in Residence program designed to work with both adults and kids in a Jewish setting to explore the connection between poetry and prayer as a way to build a bridge to a deepened Jewish identity and faith.

Editor’s Note: This week we celebrated Purim, a Jewish holiday that commemorates Queen Esther (5th c. B.C.E.) saving Persian Jews from genocide. Esther’s rise to power, however, was problematic. Her predecessor, Queen Vashti, was summoned to appear in her crown, ordered to display her beauty before the king and his nobles. The implication, according to many scholars, is that Queen Vashti was ordered to appear wearing only her crown. She refused, and it was suggested that she should be de-throned and replaced by a “worthier woman” so that “all wives [would] henceforth bow to the authority of their husbands, high and low alike” (Esther 1:19-20).

And there’s your daily dose of female oppression, Bible style.

A search began for beautiful young virgins. Those who made the cut were subjected to twelve months of beauty treatments before the king would even deign to lay eyes on them. The hopefuls then appeared before the king, who did not see any of them ever again “unless he was particularly pleased by her” (Esther 2:12-14). King Xerxes liked Esther best of all the young virgins displayed before him, and crowned her queen in Vashti’s stead. Plot twist: the king did not know that Esther was Jewish, for she had deliberately kept that fact from him. In the end Esther was able to use her beauty to bend the king to her will, and when one of his henchmen sought to have all the Jews in the kingdom annihilated, Esther stood up for her people and they were spared.

While it is this end-result that is remembered and celebrated each year at Purim, it is Esther’s degrading rise to the throne—and what it cost her to to save her people—that is the subject of today’s poem.

To come to power, Esther had to take the rightful queen’s place and become the poster child for the idea that “all wives [should] bow to the authority of their husbands.” To catch the king’s eye she had to strip away her personhood until nothing was left but her physical beauty. “That blush on my cheek? / It’s paint, / And I have glittered my eyes / And robed myself in the finery / of silk and gossamer, / lapis and gold.” It was not her devotion to her people that allowed her to save them, but that she “whored [her]self for [their] salvation.” Nor did her people care who she was beneath her beauty, or whether she survived her attempt to save them: “You asked for no thoughts. / You merely offered my body / to the king– / My life forfeit / If my beauty failed.”

Queen Esther was a pawn in men’s games, as women of history have too often been. “Diplomacy was played on the field of my body, / The battle won in the curve of my hip.” She used her beauty and her sexual allure because, as a woman of her time and place, they were the only instruments of power available to her. But if she were given a voice, she might speak of inner conflict. She might tell us what it feels like to lack the ability to either refuse or consent. Queen Esther was a hero, but what did it cost her to package and sell herself in the name of the greater good? “That blush on my cheeks? / It is the stain of victory / And of my shame.”

Today’s poem does what all great feminist biblical interpretation and midrashot do: it examines, deconstructs, and reconstructs androcentric assumptions, biases, and perspectives in biblical literature, placing women, gender, and sexuality at the center of reinterpretation.

In a time when the Bible is still being used to justify the oppression of women, we need much more of the important work Stacey Zisook Robinson is doing with “The Book of Esther.”

Sivan is the Managing Editor of the Saturday Poetry Series on As It Ought To Be and holds an MFA from Brooklyn College. She is a professor, writer, editor, comic artist, and attorney emerita. She is also the founder of Reviving Herstory. Sivan welcomes feedback, poetry submissions, and solicitations of her writing via email at sivan.sf [at] gmail [dot] com.
View all posts by Sivan Butler-Rotholz →
This entry was posted in Saturday Poetry, Saturday Poetry Series, Stacey Zisook Robinson and tagged American Poetry, Biblical Poetry, contemporary poetry, Feminist Poetry, Midrashic Poetry, Occasional Poetry, Poetry, Poetry of Faith, poetry review, Purim, resistance poetry, Seasonal Poetry, Spiritual Poetry, Spring Poetry. Bookmark the permalink.