Let Me Die, But Not Die Out: A Review of The Complete Poems of James Dickey 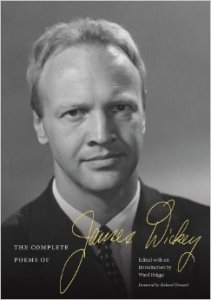 Let Me Die, But Not Die Out: A Review of The Complete Poems of James Dickey

[This piece initially appeared in The Southeast Review.]

James Dickey ranks among the titanic figures of twentieth-century American literature. He and his work remind one of Norman Mailer and Robert Penn Warren in particular—the former because of the ecstatic and primal violence their work shares, and the latter because of the depth and range of their vision and how it plays out across many literary genres. Mailer and Dickey also share a self-mythologizing effort that made them larger-than-life (who does not hear an echo of Mailer’s Advertisements for Myself in Dickey’s Self-Interviews?), while Dickey and Warren are both decidedly southern writers. In fact, an almost direct genealogy from Warren to Dickey can be discerned. But while useful comparisons might be made between Mailer and Dickey, particularly in their novels, for the purposes of thinking about Dickey’s poetry, it is Warren who can lend us the greater insight.

Dickey’s poetry shares something besides its southern flavor with Warren’s. It oscillates between unimaginably powerful and so bad it is almost embarrassing to read. Luckily for Dickey and Warren, and for their readers, they produced such copious amounts of poetry and in myriad styles that we can simply ignore the outright failures and enjoy the genius-level poems, of which they both produced many. In fact, I contend, it is something more than mere accident that Dickey and Warren should both have such exquisite successes alongside such dismal failures; there is something about their outsized ambition (in the best sense of that word), the long reach of their work that, yes, sometimes overreaches, that makes both these extremes of production not only possible but necessary.

Let’s take a look at a poem which is indicative of the energy and concerns found throughout Dickey’s poetry—though it would be misleading to pretend any single poem could represent the range of his output, given how radically Dickey re-invented himself throughout his poetic life (yet a further trait he shares with Warren). Here are the opening stanzas of “For the Last Wolverine”:
They will soon be down

To one, but still he will be
For a little while still will be stopping

Flakes in the air with a look,
Surrounding himself with the silence
Of whitening snarls. Let him eat
The last red meal of the condemned

To extinction, tearing the guts
From an elk. Yet that is not enough
For me. I would have him eat

This poem is certainly about the extinction of species and perhaps about the constant threat of nuclear annihilation that pervaded the national consciousness in 1966, the year of the poem’s publication, but it is about poetry itself in equal measure. As Dickey writes later in the poem:

But, small, filthy, unwinged,
You will soon be crouching
Alone, with maybe some dim racial notion
Of being the last, but none of how much
Your unnoticed going will mean:
How much the timid poem needs

The mindless explosion of your rage (369)

This poem is powerful, is infused with that green energy Dylan Thomas writes of so beautifully, but it is also social critique, critique of the state of poetry, and environmental critique of the modern world, with which Dickey was not much in love. Dickey finds ways to include all these themes many times over in his poems, from “The Shark at the Window” (a southern-modernist take on family and marriage) to “The Wax Museum in Hamburg” (a meditation on Nazi Germany and power relations in history) to many more. Here is the first stanza of “Amputee Ward: Okinawa 1945,” which until this volume had only appeared in a 1948 issue of Coraddi, the undergraduate-run literary journal at UNC-Greensboro.

Displayed in acreages of crackling light
More hopeless than the spatulate cross
Thrust by a withering sea, they lie
In the immaculate percentage of their loss. (6)

This poem shows Dickey as a formalist master and is an early example of his writing about the Pacific front during WWII, a theme that would continue on until his 1993 novel, To the White Sea.

It would be impossible to give an adequate sampling in this short review, but suffice it to say that the over 700 pages of poetry found in The Complete Poems of James Dickey is a treasure with a staggering variety of bounty. But it is not solely Dickey’s poetry that suggests this volume to poetry lovers and libraries everywhere. Ward Briggs writes in his preface that compiling and editing Dickey’s poems was a labor of love and this is apparent on nearly every page. The generous and insightful preface and introduction should prove valuable for classroom use. The extensive notes by Briggs, the remarks by Dickey on the composition of certain poems, and various indexes included in the 213-page critical apparatus make this the definitive edition for literary scholars and diehard fans. And, what is perhaps the greatest achievement of the book, the painstaking organization of the poems in order of publication (with the year printed beneath each title) invites us to read the book as a sort of documentary of Dickey’s literary development through his fifty-year career. I would strongly suggest that readers follow Briggs’s organization and take the book in from beginning to end. The effect is striking indeed.

In the final analysis, The Complete Poems of James Dickey is a success on nearly every front. It corrects errors and omissions from the previous attempt at a complete or collected poems. It includes useful scholarly trappings (preface, introduction, critical apparatus). And it offers the best possible portrait of Dickey-as-poet. This is certain to be the definitive edition for decades to come. One only hopes that the paperback edition will be split into two volumes, thus allowing for a wider popular readership. At 960 pages and $85 in cost, the hardback will likely only end up in libraries and the offices of well-heeled academics. Dickey’s poetry deserves this, but it likewise deserves a broad non-specialist readership as well.

I am currently an assistant professor at Misericordia University in northeast Pennsylvania. I hold a PhD in comparative literature from the University of Illinois, an MFA in creative writing from Ohio State University, and a legal studies certificate from Purdue University. My work has appeared in Cincinnati Review, Harvard Review, The Hill, Huffington Post, Indiana Review, The Literary Review, New Letters, Prairie Schooner, A Public Space, and Subtropics, as well as being listed as a "notable essay" in Best American Essays 2015. My books include From the Crooked Timber (short fiction), The Cartographer’s Ink (poetry), The Doors You Mark Are Your Own (a coauthored novel), Blackbirds in September: Selected Shorter Poems of Jürgen Becker (translation), and Bernie Sanders: The Essential Guide (nonfiction).
View all posts by Okla Elliott →
This entry was posted in Uncategorized and tagged American Poetry, James Dickey. Bookmark the permalink.