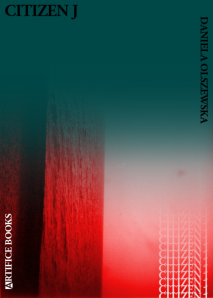 Okla Elliott: What difficulties did you encounter writing a book entirely centered around one character?

Daniela Olszewska: I started making the poems that became Citizen J while I was an undergraduate at Columbia College Chicago (so, somewhere around 2005). Originally, the character of J was known as Jane Doe and she was an autobiographical-ish twentysomething who lived in Chicago. As I became older and (slightly) less solipsistic, I became more interested in making Jane/J less a reflection of myself and more of an Etch-a-Sketchable character I could ab/use to show off the images in my head associated with my concerns over gender, sexuality, citizenship, careerism, and terrorism. Poetry gave me the permission to ignore linear narratives; it allowed me to essentially re-write the character of J whenever I wanted. This story had to be in poem form; I could not have showed all the things I want to show if I was trapped in a novel.

OE: Did your Polish heritage play into the creation of Citizen J? Did it inspire the Soviet-style atmosphere of the book?

DO: Absolutely. I was born in Wrocław, but I was raised in Chicago by my American mom. Growing up, I would see my Polish father and his maniac  ex-Solidarity nationalist friends 3-4x a month. This was just enough exposure to ingrain some sense of the horrors of Soviet Satellite Statehood, and these terrors have definitely stayed with me in adulthood and spilled into most of my writing. Also, while I was in the process of writing Citizen J, I had this misfortunate notion that I should get a masters degree in Slavic Languages and Literature, so I was also consuming a shit ton of Soviet-era media during the writing of these poems. After finishing Citizen J, I became aware of the work by this Russian fashion designer named Ulyana Sergeenko. Her Fall 2012 collection is basically Citizen J in couture form: http://www.style.com/fashionshows/complete/F2012CTR-ULYANA I wish I had known about her while I was writing the book; I would have tried to include pictures of her dresses at the start of each new chapter.

OE: What current projects are you working on or that are forthcoming?

DO: I’ve been doing a lot of writing with/about/against the Internet. In June, I had an e-chap come out from NAP. Its name is THIRTEENZ and it chronicles my attempts to run my favorite parts of Emily Dickinson through an LOLCats translator.  Interested and/or concerned citizens can find it here: http://napnapnaps.com/post/88325873183/thirteenz.

Last month, a book of prose poems  I co-wrote with the awesomepants Carol Guess came out from Black Lawrence Press. The book is called How To Feel Confident With Your Special Talents and its writings are inspired by articles from the user-generated content advice site, WikiHow. Curious citizens can trade their dollars for a hard copy of the book by going here: http://www.spdbooks.org/Producte/9781625579041/default.aspx.

I’m currently working on two projects. One is a small collection of confessional-ish poems about a bad break-up (groundbreaking territory for a poet…). The poems are formatted to look as if they have been written in Tumblr’s text post box and I’ve been having a lot of fun coming up with hashtags for each of the pieces. I am also working on a collection of short fictions “narrated” by various Men’s Rights Activists (it’s a comedy…).

in the midst of dressing
up to go messing up

the motion that the insides
of her toasters are miked.

she goes to consult her pet
magic mirror, but he looks

miked too—wired to heads
that can store more than

the traditional three minutes’
worth of incriminating

we made certain to make

eye contact. when j saw
the sheriffs ranging down

in zealously-patterned
ties, she tossed
her free lunch +++

++=instructed the fire
escape part of her

brain to shrink
to a little bigger

than miniature,
a little bigger       than cell.

j rendezvouses with him in public restroom and mid-sized luxury sedans. he is all gussied in ascot and champagne cork heel. speciously complimenting j’s proliferation skills as he slides a stirrup around her hot hot holster. nobody is giving anybody a heaveho tonight. casually, j twists his loose mammal skin into a party favor shape. an heir to a tin can telephone empire, he has always been an expert at getting his people to the front of the breadline. they have so many levels and layers in common. tenderly, he suggests they hire someone to hold her hair back while she’s working. it was never nothing personal. yet j aspires to one day be on his side of the business. she wants ambulances to chase her for a change. she wants, she says, to be able to act as if she is at least as infamous as him.

I am currently an assistant professor at Misericordia University in northeast Pennsylvania. I hold a PhD in comparative literature from the University of Illinois, an MFA in creative writing from Ohio State University, and a legal studies certificate from Purdue University. My work has appeared in Cincinnati Review, Harvard Review, The Hill, Huffington Post, Indiana Review, The Literary Review, New Letters, Prairie Schooner, A Public Space, and Subtropics, as well as being listed as a "notable essay" in Best American Essays 2015. My books include From the Crooked Timber (short fiction), The Cartographer’s Ink (poetry), The Doors You Mark Are Your Own (a coauthored novel), Blackbirds in September: Selected Shorter Poems of Jürgen Becker (translation), and Bernie Sanders: The Essential Guide (nonfiction).
View all posts by Okla Elliott →
This entry was posted in Uncategorized and tagged Artifice Books, Chicago, Columbia College BFA, Curbside Splendor Publishing, Poetry, Polish-American Writers. Bookmark the permalink.