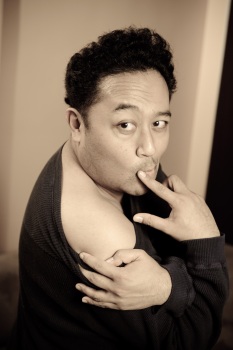 A shy pebble rippling water. Each phrase
a school of startled ginger fish shimmering
through the telephone line. I’d like to invite
you to my place & immediately I became
a frightened puppy in a tropical rain forest.
Only to my surprise, I was in Brooklyn
reading Lorca in his living room, calmly
sipping tea. He played me Joni Mitchell
crooning the lines he loved & even tried
to sing the high notes. His falsetto cracking
midair as we both laughed. That’s when he
rested a photo album on his lap & pulled
a picture of himself, a young boy swimming
in a Buenos Aires blue reflecting pool. I wanted
to lick the nape of his neck instead said, You’ll
have to teach me how to swim. I’m afraid
of water. That’s when he placed his lips
to mine, our most perfect palates open as we
pulled away to catch our breath.. You have
to be relaxed otherwise you’ll drown. I kiss
him again feeling ribs beneath sweatshirt,
our hearts racing the way a diver freefalls
plunging in a sea of pearls

Today’s poem appears here today with permission from the poet.

Regie Cabico is one of the country’s leading innovators and pioneers of poetry and spoken word having won 3 top prizes in the National Poetry Slams as well as the Nuyorican Poets Cafe Grand Slam. Bust Magazine ranked him in the 100 Men We Love & The Kenyon Review called him the Lady Gaga of Poetry. He received 3 NY Innovative Theater Award nominations and won a 2006 Best Performance Art Production award for his work on Too Much Light Makes The Baby Go Blind. Other theater credits include the Hip Hop Theater Festival, The Humana Theater Festival & Dixon Place. He has appeared on two seasons of HBO’s Def Poetry Jam and NPR’s Snap Judgement. His work is published in over 40 anthologies including Aloud: Voices from the Nuyorican Poets Café, Spoken Word Revolution & The Outlaw Bible of American Poetry. He has taught at Urban Word NYC, Poets House, Kundiman, Split This Rock and has been on the faculty of Banff Arts Center’s Spoken Word Program. Mr. Cabico received the Writers for Writers Award for his work with at-risk youth from Poets and Writers. He is former NYU Artist in Residence for Asian Pacific American Studies. He performs throughout the UK and North America & resides in Washington, DC.

Editor’s Note: I had the pleasure of seeing Regie Cabico perform recently at NYC’s louderARTS weekly reading series. He gave one of the most engaging, entertaining, and raw performances I’ve seen—poetry or otherwise. Mr. Cabico rolls up his sleeves and delves into the theater of the real, exploring queer themes and other matters of the human condition, as thoughtful and honest in his humor and wit as with his tenderness. A true performance artist in his own right, Regie Cabico’s words are as riveting on the page as they are displayed before a riveted crowd, his peacock feathers on full display. After his performance, the drowning of today’s poem stayed with me for days. When asked if he had any books for sale he replied, “Nothing for sale online but my body.” The Lady Gaga of poetry indeed, and then some.

Sivan is the Managing Editor of the Saturday Poetry Series on As It Ought To Be and holds an MFA from Brooklyn College. She is a professor, writer, editor, comic artist, and attorney emerita. She is also the founder of Reviving Herstory. Sivan welcomes feedback, poetry submissions, and solicitations of her writing via email at sivan.sf [at] gmail [dot] com.
View all posts by Sivan Butler-Rotholz →
This entry was posted in Uncategorized and tagged American Poetry, Asian American Poetry, Poetry, Romantic poetry. Bookmark the permalink.