The Woman In The Photograph

What is not conscious,

comes to us from outside ourselves, as if by chance.

THE WOMAN IN THE PHOTOGRAPH

As a crowd of 20,000 of his countrymen implored him to “Open the gate!” on that chaotic Thursday evening, Harald Jäger, head of passport control at the Berlin Wall’s Bornholmer Strasse checkpoint, kept shouting at the guards under his command, “What shall I do? Order you to shoot?”

It was the night of November 9, 1989. Earlier that evening, a reporter asked Günter Schabowski, head of the East German Socialist Unity Party, when travel restrictions to East Berlin would be lifted. In the heat of the moment, Schabowski answered: Sofort . . . unverzüglich (Immediately . . . without delay). Taking his words literally, and primed by months of demonstrations against the East German Communist government, waves of men and women poured into the streets of the Eastern sector and surged toward the Berlin Wall. The State Security Guards, Stasi, as they were called, were entirely unprepared for the advancing crowd. Some tried to reach their supervisors but got no clear instructions on what to do.

At 10:30 p.m., the Stasi guards abandoned their post on Bornholmerstrasse. By midnight, hundreds of thousands of German citizens from both sides of Berlin converged on the Wall. Wielding hammers, makeshift tools, or just bare hands, men and women pummeled and smashed at the hated barrier that had divided communities, families, and friends for twenty-eight years.

My husband and I sat in our Berkeley living room, mesmerized by the astonishing news. I moved closer to the TV and turned up the sound. “The Wall as we have known it since 1961 can no longer contain the German people,” announced NBC news anchor Tom Brokaw, the first American journalist to report from Berlin that night. I knew we were watching a pivotal event in world history, but I had no idea that reverberations from this event six thousand miles away would find their way to my own doorstep; nor could I explain the tears trickling down my cheeks.

“Doesn’t this remind you of the sixties?” Michael asked.

Yes, I felt exhilarated on behalf of the protestors. I could see myself there, the tall girl with the long hair reaching her arm up to be pulled onto the Wall. But it also reminded me of something much more troubling. Don’t you get it? Don’t buy German goods, my parents used to say. Don’t speak German in public. The demonstrators were shouting in the language my parents used with each other in private moments. It was also the language of the Nazi commanders who drove them from their home and country.

Nothing specific had ever been said in my presence about the Holocaust, and I knew even less about the relatives that I supposed must have once existed, but the staccato rhythms of German speech evoked dread in my chest. Its harsh tones and sharp edges reminded me of a dark place in my mother, the deep chasm where her sentences fell off and the subject changed.

I remembered a remark my mother made when I was nine years old. We were walking to the A&P supermarket. I gripped her elbow to hold her back as a car whizzed by us on Hillside Avenue, a busy street near the Queens County Courthouse.

“I had the right of way,” she said, annoyed.

“A lot of good that will do if the car hits you, Mom.”

When we reached the other side, she turned to me and said, “I kiss the ground we walk on.” I looked up at her, confused, waiting for her to continue. It must have to do with Hitler, I thought, but I knew not to ask.

“C’mon, I still have a bunch of things to do today,” she snapped, walking faster, and that was the last I heard of it.

Every day I turned on the news to follow the events taking place in Germany. I found out that huge demonstrations had been going on for months in Berlin and Leipzig. The name Leipzig gave me chills—my mother’s birthplace. Until then, Leipzig had been nothing more than a void, a place locked away behind an Iron Curtain—one Wall built by the Soviets, the other erected by my mother to obscure her past.

“What would Mom have thought of this?” I asked Michael. But I didn’t expect an answer because my mother had died of a stroke two years earlier. In the first months after her death, I felt at peace. Her stroke was swift and complete, “almost like a Zen master’s sword,” I told the friends at her memorial service. I was grateful she didn’t linger with her capacities diminished or have to depend on other people for her care. Both would have been her worst nightmare.

But hearing the references to Leipzig on the news made me wish I could call her. I knew nothing about the city where she grew up, though I remembered an odd story she had told me after a trip to Berlin in 1959. It was the summer after she remarried her second husband, George, and he had taken her to Switzerland. It was also the first time she had traveled to Europe since the thirties, when she and her sister Erika escaped from the Nazis.

At the end of August, George returned to New York and my mother went to visit an old school girlfriend who lived in Berlin. It made no sense to me that she would want to go to Germany, or that she had a German friend. Even more bizarre, her friend said my mother was lucky to be a Jew and get out when she did. She said the Germans who were left at the end of the war suffered horribly with no food or heat, and her family almost died of starvation.

“A pretty insensitive thing to tell my mother,” I said to Michael. “The Jews were lucky?”

Before leaving for Europe, Mom called the American Embassy in New York to inquire about going to Leipzig. Although it was less than a hundred miles south of Berlin, it may as well have been in another world. Leipzig was in the Soviet-controlled German Democratic Republic (GDR). The official told Alice that entering the Eastern zone would not be wise. Since she was born there, her American passport could not protect her if the East German police decided to detain her.

My mother was not dissuaded. “I decided to take a chance,” she’d said, demonstrating her defiance with a familiar gesture of protruding her jaw. The Berlin Wall had not yet been sealed and it was still possible to walk through the Brandenburg Gate to the Soviet sector. On the eastern side was a broad boulevard called Unter den Linden, where in the spring of Alice’s youth the linden blossoms were sometimes so thick that when a breeze blew it looked like snow falling on the outdoor café tables and chairs. She winced at the memory of sitting opposite her sister at Café Kranzler, drinking a tall glass of hot chocolate.

She’d taken a tram to the Mitte district of Berlin and then fallen in step with several British tourists and a German couple who were walking toward the crossing. A large sign alerted her that they were leaving the western sector: ACHTUNG! Sie verlassen jetzt West-Berlin.

The minute she crossed over to the East, she was absorbed into a landscape of overwhelming drabness, as though all color had been sucked out of an old photograph. Security guards were posted at short intervals, and she clutched her purse with passport and camera tightly under her arm.

The badly bombed area had seen little repair since the end of the war, and most of the buildings were no more than shallow facades with a restored entrance on the street. She took a few steps toward an alley where she could peek beyond to the next street. She saw piles of debris—bricks, concrete, and twisted metal that had still not been removed after fourteen years.

She sensed the soldier even before she heard the thud of his boots on the gravel. She turned her head to meet his gaze. He was young and serious, but didn’t look cruel. He wore the green military uniform of the Volkspolizei, the People’s Police, and he carried an automatic rifle. A chill ran up her spine, but she forced herself to flash her friendliest middle-aged American woman’s smile. She didn’t say anything, preferring to be seen as an ignorant tourist, not a German Jew who should know better.

He lifted his right arm to direct her back to the main street. She nodded to signify that she would follow his command. She wished she could take a picture to show Erika what miserable rubble was left of the glamorous street where they often spent their weekends and holidays, but she didn’t dare take out her camera. She turned around and walked back to West Berlin.

Watching the scenes on the news, I thought about my mother’s story and wondered what it was like to see a pile of rubble instead of a street where you once strolled amidst flowering lime trees.

“I can’t imagine why Mom would have wanted to step foot in that place again,” I told my husband. “I never would.”

Mani Feniger has been a writer, teacher and therapist in the Bay Area for over twenty years. She is author of “Journey from Anxiety to Freedom” (1997) and just released memoir, “The Woman in the Photograph: The Search for My Mother’s Past.”
http://www.manifeniger.com 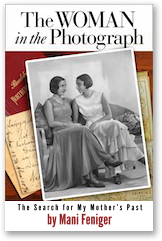 This entry was posted in Mani Feniger. Bookmark the permalink.