Good News About Breast Cancer? Not So Fast … 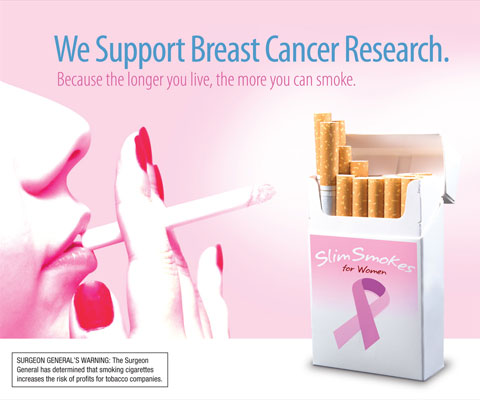 While this is not a real campaign, it represents the pinkwashing dilemma: does supporting breast cancer research make up for toxic products? Ad and caption from Johanna Björk's excellent essay on pinkwashing at http://www.goodlifer.com/2010/10/pink-ribbons-pink-products-pinkwashing/; reproduced by permission.

I’ve written about cancer previously in these pages. In Against Medical Advice, I recounted what I learned when someone I loved (I called her Bonnie) was diagnosed with breast cancer. In Poisoned, I traced Bonnie’s and my efforts, once her treatment was over, to identify the root causes of our cancer epidemic and comprehend why forty years of the “War on Cancer” have failed to dramatically reduce cancer rates. Finally, in Not Your Median Patient, I paid tribute to my two of my scientific idols, evolutionary biologist Stephen Jay Gould and climate scientist Stephen Schneider, who applied their own scientific expertise and methods to understanding and fighting their own cancer.

One organization I commended in “Poisoned” was Breast Cancer Action for their efforts to eliminate the root causes of cancer in our environment. BCA’s seminal Think Before You Pink™ campaign urges consumers to resist buying pink-ribbon products from companies that actually worsen the cancer epidemic. BCA has recently stepped up their outreach, including a new blog and an informative monthly webinar series. For example, I learned in this month’s webinar that National Breast Cancer Awareness Month (NBCAM) was co-founded by the American Cancer Society and the pharmaceutical division of Imperial Chemical Industries. ICI is now part of pharmaceutical giant AstraZeneca, which manufactures not only several breast cancer drugs but also the herbicide Acetochlor, a known carcinogen, thus profiting from both causing and alleviating cancer.

So I’m pleased today to reprint an essay by BCA’s communications manager, Angela Wall, about the need to go beyond breast cancer “awareness” (as if we’re not already aware of breast cancer) to identify and eliminate the toxins that cause it. If the beginning of wisdom is to call things by their right names, as the Chinese proverb says, then calling NBCAM “Breast Cancer Industry Month” is wise indeed. My thanks to Ms. Wall and BCA for permission to reprint her essay here.

Good News? Not So Fast …
By Angela Wall

Good news on breast cancer, says Sadie Stein writing for Jezebel. Why? Well, because of pink ribbon awareness campaigns more women are getting screened and diagnosed earlier. Hold on. Does this ring false to anyone else?

Awareness only got them to make a screening appointment to detect the cancer that was already developing.

Ordinarily, I celebrate an article that tacitly suggests that we’ve had enough pink awareness. I’d certainly celebrate the end of the pink noise and hypocrisy that accompanies breast cancer industry month because then instead of having our attention distracted by pink awareness campaigns, we could all start addressing the real issues that increase our risk of developing breast cancer and we might actually be able to focus on reducing diagnoses rather than celebrating them.

I doubt that’s going to happen though. There’s too much money to be made every October from slapping a pink ribbon on a product. Plus and the feel good rewards that accompany  pink ribbons can really boost a company’s image regardless of whether or not the product being sold actually contributes to breast cancer. Heaven forbid we make consumers aware that the products they are purchasing actually contain ingredients that might cause cancer. Awareness apparently doesn’t need to go that far. It’s no surprise then that awareness never prevented anyone from developing breast cancer.

Awareness campaigns have never addressed why more white women get diagnosed with breast cancer but more women of color die from it. Awareness and pink ribbon campaigns have only ever distracted us. Awareness campaigns don’t demand we demand tighter state and federal regulations around the manufacturing and production of cancer causing chemicals or their being included as “ingredients” in the products we use to clean our homes.

I’ve never seen anything to celebrate about breast cancer and I certainly get deeply troubled by the idea that we might have done enough simply because people are being screened more regularly even though more cancer is being detected. Surely, screening rates are only to be celebrated when fewer people receive a cancer diagnosis.

I would agree that awareness has served its purpose. Now it’s time to demand that chemical corporations stop manufacturing products known to cause cancer. I would celebrate if Eli Lilly announced that they were stopping production of their cancer-linked recombinant bovine growth hormone (rBGH), which contaminates a third of US dairy products. I would celebrate if the FDA declared that rather than meeting with Roche Pharmaceuticals to reconsider approving Avastin as a treatment for metastatic breast cancer (despite evidence demonstrating that it doesn’t work), they refined their approval guidelines and insisted that treatments cost less, do more than existing options, and improve the quality of life of women with breast cancer who take them. So I think I’ll hold off on my celebrating if nobody minds until the studies start to show real systemic changes are reducing breast cancer diagnoses over the long term.

John Unger Zussman is an award-winning screenwriter, creative writer, and technical writer from Portola Valley, California. His essays have been published in The Sun Magazine. He has won a Grammy Award (as a member of the San Francisco Symphony Chorus), but there’s room on the shelf for an Oscar and a Pulitzer. John also works as a corporate storyteller in info and biotech and holds a PhD in Psychology from Stanford University.
View all posts by John Unger Zussman →
This entry was posted in John Unger Zussman and tagged Breast cancer, Breast Cancer Action, Breast cancer awareness, Cancer, Cancer prevention, National Breast Cancer Awareness Month, Pinkwashing, Think Before You Pink, War on cancer. Bookmark the permalink.

1 Response to Good News About Breast Cancer? Not So Fast …