Posted on November 22, 2010 by andreaseconomakis 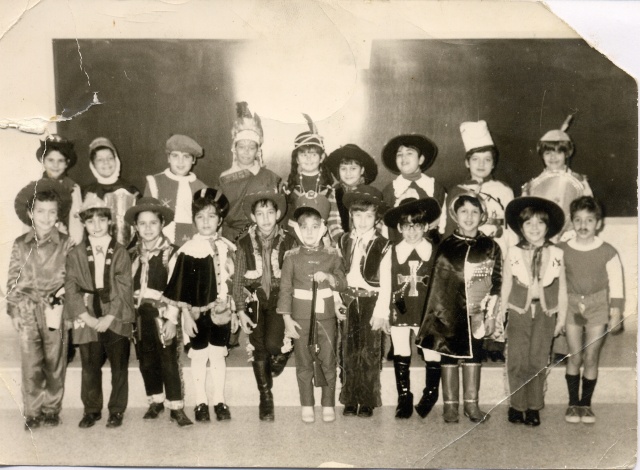 The author and his p-spot in second grade

When I was a young boy I was fascinated by the Dictator of Greece and his cadre of austere military men. What I think impressed me the most was the Dictator’s black bulletproof limousine and the fact that the cops would stop all the traffic so that his convoy could roll through the lights without stopping. In a city that was already starting to show the signs of traffic gridlock like most cities today, I reckoned that the ability to cruise through red lights uninterrupted was the equivalent of absolute power. One time I even managed to see the Dictator’s shiny balding head as he sat in the back seat of the limousine. He seemed to be both smiling and angry at the same time. Maybe he was smirking at all us hapless motorists who had to wait for him to go by. I didn’t know enough back then to question the politics of the whole situation. I was blinded by all the guns and uniforms and cops and pomp and circumstance.

During the time of the US-backed military dictatorship or junta (1967-1974), my family occasionally used to eat at a restaurant called Anna’s on the corner of Kifissias and Katehaki avenues, across from the old Luna Park. I loved that restaurant for a myriad of reasons. First of all, they served steamed snails in a red sauce. Second, it was across from the Luna Park. After dinner, while my mother and father argued or drank or sat silently avoiding each other’s eyes, my brothers and I would go over to the Luna Park and play bumper cars and shoot balloons and race go carts. You could even win bottles of booze from the games, something which later became a fun way to score cheap liquor with my stepbrother Lee. But what was most cool about Anna’s was that the Dictator’s second-in-command would occasionally eat there, plain-clothes police escort always occupying the nearby tables. This man also had a shiny bald head, though his was clean shaven like Mussolini’s infamous pate. He always looked angry in his double-breasted suits. I tried to imagine what kind of cool guns he and his police escort carried under their jackets.

Though my dad and my friends all quietly intimated that the dictatorship was bad and doomed, I liked looking at those severe men in their snappy uniforms and at the symmetrical military parades they staged several times a year. And, of course, I loved being stopped at the traffic lights, hopefully first in line, where I could see the black cars and their police escorts whiz by unobstructed. What could possibly be wrong with these cool-looking people in their uniforms? I mean, everything was fine at home, right? We had food and shelter and pets and whatnot. Why was everyone complaining? Life seemed to roll on normally every day and, barring a few small hassles, I was happy. Okay, it was annoying that we had to go to church every morning before school (by Dictator’s decree), to stand for an exhausting hour while mysterious bearded men in black robes and tall hats droned on and on in an indecipherable language. But that was made up for by the cool censorship stamps on the back of every school book. Each stamp displayed an armed soldier standing in front of a flaming eagle, the Dictator’s sacred flaming phoenix. Rumor had it that if you removed the stamp you would be sent to jail instantly. My friends and I toyed with the stamp constantly, sometimes removing it and glueing it back on with spit. We imagined armed men bursting into our classroom and hauling us off kicking and screaming to the torture chambers. We were such rebels. No armed men ever came to haul us off of course, not for the stamps nor for us substituting dirty words in for the real ones when we sang the national anthem in the school yard every morning. So what was wrong with the Dictatorship? My young eyes simply could not see what the fuss was all about. Then one day it all became clear to me.

It was Apokries (Greek Halloween) and I was a bit upset because I didn’t have a costume to wear to school. I knew my friends would all dress up as Zorros and pirates and crusaders and cowboys and fairytale princes. Somehow or other my parents had forgotten to get me a costume. At the last minute at home, before my brothers and I had to go meet the school bus, my middle brother came up with the idea of having me wear some shorts and sneakers and a red and white Arsenal soccer T-shirt. I was going to go to school dressed as a footballer. I guess it was a pretty dumb idea, considering I dressed this way every day, but what other options did I have? I remember being completely embarrassed on the bus as I sat between Captain Hook and one of the Seven Dwarves. Taking pity on me, my brother inked a mustache on my upper lip. I guess he figured that I would look less stupid as an older footballer. Well, my classmates all made tremendous fun of me, but pretty soon they moved on as they were too busy showing off their own cool costumes. I dreaded the fact that the school photographer, who was making his rounds from classroom to classroom, would immortalize me in my silly duds. I decided that I would stand in the 2nd row during the photo in order to conceal my shame.

My teacher back then was a horribly strict woman who was the living reincarnation of the Devil. She loved the Dictatorship and kept us kids terrorized with threats and actual manifestations of punishment. In step with the Dictatorship’s policy of order, Mrs. M. demanded military-like obedience from her 1st, 2nd and 3rd graders. I was in the 2nd grade then and I feared and loathed this woman with passion, as did all my peers. We would sit in twos at our desks, hands clasped together in front of us (as regulations dictated), trembling with fear, hoping she wouldn’t call on us for something or other and consequently whip the shit out of us with her ruler or with the flesh-stinging mullberry twig she cut every morning from the school yard. Anyway, that Halloween we were sitting there, hands clasped in front of us, for what seemed like a very long time, waiting for the stupid photographer to come by, when I suddenly realized I had to pee real bad. I started shaking my two legs back and forth to ease the pain. The bell finally went off signaling the break. Mrs. M. ordered us to stay put. The photographer was due any minute. The pain in my bladder became intense. Braving the anticipation of Mrs. M.’s anger, I raised my hand meekly and asked her if I could run to the bathroom. “Absolutely not!” she barked. She reiterated that the photographer was due imminently. Fifteen agonizing minutes went by. I was in tears, my knees knocking together, my bladder ready to explode. I wasn’t going to make it. I raised my hand again and was shot down again, this time with a threat. I secretly cursed her and the dictators and all they stood for for the first time in my life.

It was at the very moment that the door swung open and the photographer marched in, the moment that my mind imagined a big wave crashing against the shore, that I was finally overwhelmed. Warm urine flooded my khaki shorts and trickled down my trembling leg. Mrs. M., resembling a military sergeant-at-arms, barked out that we should all line up together in front of the blackboard in two rows, one behind the other. Trying to conceal my mishap, I crept up to Mrs. M. and indicated my problem. She looked at me and my dark pee-stain with disdain and ordered me to the front line. Defeated, I edged my way to the front, choosing the corner. Maybe the photographer would crop me out by mistake. No such luck. The flash flashed and I was immortalized, huge pee-spot in the middle of my shorts, stupid Arsenal outfit and all. It was from that day on that I came to hate all fascists and military people and authoritarians. I hated Mrs. M. and everyone who was like her. I hated the Dictator and his bald-headed, limousine-riding, uniformed thugs. My eyes were finally open. I had to pee on myself to wake up, but I was finally awake.

The following year the military junta started to unravel, plagued by its catastrophic handling of student and civilian unrest and its asinine mismanagement and meddling in international affairs. Within a year of the bloody Athens Polytechnic uprising and the Cyprus fiasco the Dictatorship fell and all those bald-headed fascists and M.-types got sent to jail. I rejoiced. I’ll always remember riding my bicycle down to the center of Athens a couple of days after the Athens Polytechnic students’ revolt that ultimately led to the downfall of the Junta. The Dictator had sent in tanks and over twenty protestors were killed as they chanted anti-government slogans. One of the tanks simply rolled over the university’s gates and squashed many of the protestors. The tanks on the streets opened fire and rolled over everything in their way, leaving flattened cars and dead people lying in pools of blood. I remember walking around the area where the events had taken place, my heart pounding. As I crept amongst the carnage and bullet casings and broken glass and garbage and revolutionary fliers, I saw a tattered pair of pants lying on the street, soiled with tire and tank tracks. Near the crotch was a fist-sized imprint of dried blood. It looked a lot like the photo of my Halloween shorts. My heart sank. I was pretty sure that the pants’ occupant hadn’t met a good end. On my way back home I took an oath to never trust dictators and “men of authority.” I remembered my humiliation with Mrs. M. and I took an oath to never trust “women of authority” too. I vowed to myself to always fight violence and hatred and tyranny. I wanted to kill all the fascists. If they stick it in your face, then stick it right back to them.

Looking back now, I realize that the photograph of me with the pee-stain is the first photograph of a conscious me. It was like I was born then. That was when I woke up from my childhood dreams. I would be reborn again years later, when I freed myself from the belief that hatred and violence can solve anything. No photograph this time of a childish me with an embarassing p-spot. Just a quirky smile and one eye half-closed, questioning, wondering if the photographer back then knew what I know today.

This piece is part of a collection of stories on blindness entitled: The Blindness of Life.

For more stories by Andreas Economakis click on the author’s name below.

This entry was posted in Andreas Economakis and tagged The Blindness of Life. Bookmark the permalink.