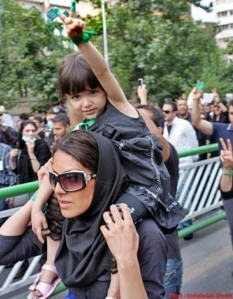 Springtime in Iran usually is a blissful time, with the coming of the Persian New Year on the day of the vernal equinox, usually celebrated on March 20th or 21st. As an Iranian-American woman growing up in the U.S., I always wondered what it would be like to be celebrating this wonderful holiday known as “Norooz”, which means ‘new day’, with my fellow Iranians.  Usually I just take a day off work or school and have to explain to people why I celebrate a New Year holiday in the middle of March, instead of celebrating Christmas or Thanksgiving or any other “Am-rik-aee” holiday. Last year, I had the chance to visit my family in Iran during the Persian New Year holiday season, and with my own eyes finally got to witness the vibrant street markets and lively merchants selling the traditional holiday fixins for the annual Norooz altar…hyacinth flowers, garlic, gold fish; our equivalent of Christmas trees and ornaments. I also noticed a buzz in the air about the upcoming Iranian election in June.  Even though former Reform President Mohammad Khatami had just withdrawn from the election earlier that week, people still had hope that they were going to have an “Obama v McCain”-esque showdown, with Ahmadinejad on the radical right, and one of the (at that time) yet-undecided other candidates on the “reform” side (or really as it should be called, “the significantly less right but still very to-the-right by our standards” side). People had witnessed the power of the vote in the American elections, and were preparing to take to the polls in droves to vote for change. They were hopeful, as if they were on the brink of achieving progress peacefully and democratically through spectacular voter turnout, and challenging the authority of a supposedly ‘theocratic democracy’ which had not been tested anytime during the reign of the Islamic regime since it was ushered in during the bloody revolution of 1979. They needed a government that better represented their economic interests, to turn the attention to domestic issues such as unemployment and infrastructure problems, and also wanted some reprieve from the radical element of the regime that had taken over Iranian politics and brought such negative attention to the country for over 30 years. 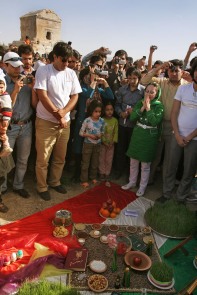 Flash-forward one year later to present day, March 2010. Preparations are yet again under way for Norooz, both amongst the Iranian population in the United States, and back with my family and fellow Iranians in Iran. But the mood is somber, one of frustration, anger, and resentment. The election was a sham, as everyone now knows. Hundreds of Iranian brothers, sisters, children, and elders have given their lives for freedom and to have their voices and votes heard, and have not, as of yet, even come close to attaining that precious freedom that we Americans take for granted every day. We captured the world media’s attention for just a moment (at least until Michael Jackson died), and had our voices heard on Twitter and You Tube, coining the term “Twitter Revolution”. All Iranian-Americans, including myself, finally felt sympathy from average Americans instead of the usual fear and disdain that has followed us since the hostage crisis. Freedom fighters, politicians, activists, musicians, actors, and citizens from around the world were both captivated and horrified with images of dying Iranian youth on the street; even U2 dedicated their disaffected-people’s anthem “Sunday Bloody Sunday” to the people of Iran. And politics and international policy once again became center stage with the Iran’s pending nuclear development, instead of those forgotten domestic issues that continue to affect regular Iranians on a daily basis. With regard to the election, most Iranians keep repeating a famous Iranian adage that says, “The fire is not over; it is still smoldering as embers beneath the dirt”, but that is become more and more difficult to believe as the situation grows bleak with each passing day. Just this week, the so-called Islamic government shut down two more prominent Iranian reform newspapers, and Supreme Leader Ali Khamenei has barred the opposition from running in the future, claiming THEY have lost their credibility and ‘their right to participate’ by not accepting the (doctored) results of the (falsified) election. To me, what is even more infuriating than the dictatorial oppression of this regime is this blatant hypocrisy that is so incredibly obvious to most everyone both in Iran and around the world…one wonders whether they have gone completely mad with power; even devout Muslims are questioning their religious legitimacy, and it has become a current topic of discussion amongst many scholars and policy makers alike. Mr. Mir-Hossein Mousavi, the “Green Revolution” reform candidate who has been in the spotlight of all the election pandemonium (and shockingly to me, has thankfully not been physically harmed by government supporters…yet), agrees:

“This is the rule of a cult that has hijacked the concept of Iranianism and nationalism,” Mousavi said in an interview published on his Web site, kaleme.com. “Our people clearly understand the difference between divine piety and thirst for power in a religious style … our people can’t tolerate that (dictatorial) behaviors are promoted in the name of religion.”

I couldn’t agree more with Mousavi’s eloquent manner of summing up the root of the problem in Iran. This ‘Islamic’ government, through its falsification of a legitimate election, and through its violent oppression and of a large group of voters and average citizens, has proven itself to be nothing more than a petty military dictatorship thirsty for political power and financial gain. With an Iran that is in the hands of the regime’s Revolutionary Guard, helmed by a truly delusional Mahmood Ahmadinejad, a Guard veteran himself, I am left to wonder what is going to happen for the next Norooz. Will we truly have a ‘new day’ in Iran? Will I live to see change happen in my lifetime? Will my family and cousins in Iran have to live through another vicious war, like those that are occurring in neighboring Iraq and Afghanistan? Will I even be able to visit Iran again? Or, as I sign this statement anonymously, must we Iranians fear crackdowns and retribution like that which has occurred to Professor Kian Tajbaksh, Bijan Khajehpour, or most recently renowned film director Jafar Panahi. A year later, Iranians are left with more uncertainty than ever about the direction our country will go in this next New Year, and what amount of violence, death, and sacrifice must those in Iran face before they have the basic right to determine their own leadership without interference from any dictatorial OR foreign power. My only hope and wish for this Norooz is that we will one day truly be able to celebrate a new day in Iran, one that will enshrine the values of freedom and liberty that all Iranians so passionately seek in the streets. On this March 20, I hope others think of Iran and will have the same wish for my country as well.

Ms. Irani is the pen name of a writer who lives in the Bay Area, California.

This entry was posted in Ms. Irani. Bookmark the permalink.