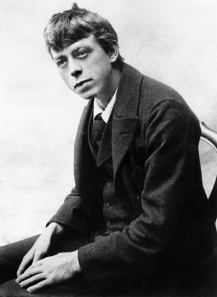 Our relationship began with a somewhat matter-of-fact exchange of letters: brief, objective questions and answers. I learned that, starting in early 1929, Robert Walser was a patient in the Waldau Sanitarium near Bern, and since 1933 had been a patient at the national welfare and nursing hospital of Appenzell-Ausserrhoden in Herisau. I wanted to assist in some way with the publication of his works, and to do something for him personally. Of all the Swiss writers of that time, he seemed to me to be the most original. He told me he was willing to see me. So it was that I traveled early one Sunday morning from Zurich to St. Gallen. Walking along the road, from within a church I overheard a sermon underway on the Parable of the Talents. In Herisau, the church bells rang as I arrived. Soon I found myself with the chief of medicine at the hospital, Doctor Otto Hinrichsen. I introduced myself, and was granted the liberty of taking a walk with Robert.

From an adjoining building came the esteemed 58-year old poet, accompanied by the warden. I was struck by his childlike expression, red-flushed cheeks, blue eyes, and trim, golden mustache. He was already turning gray at the temple. His well-worn collar and necktie were set somewhat crookedly, his teeth not in the best condition. When Dr. Hinrichsen wanted him to button the top button of his vest, Robert rebelled: “No! The top button must remain open!” He spoke in a melodious Barndutsch, as he had no doubt spoken in his youth in Biel. After a somewhat abrupt farewell to the doctor, we departed on our way toward the Herisau train station and further towards St. Gallen. It was a hot summer day. On the way we encountered church-goers, who greeted us in a friendly way. Robert’s older sister Lisa had warned me that her brother was extremely suspicious. How did I manage? I stayed silent. He stayed silent. And it was on that narrow footbridge of silence that we met one another. With heads glowing we walked across a wooded landscape, undulating sweetly and free of demons. Robert stopped now and then to light a Maryland cigarette, and to inhale the perfume that clung, for an instant, under his nose.

Lunch at Lochlibad. With blood-red Berneck wine and beer, the words began to flow. Robert told me that he had worked for Credit Suisse and the Cantonal Bank while living in Zurich at the turn of the century. But this was only for a month or so at a time, because he wanted to leave himself free to write. You can’t serve two masters at the same time. During this period he was working on his first book, Fritz Kocher’s Essays, which was published in 1904, illustrated with 11 drawings by his brother Karl. He never saw any compensation for this work, and after the bookstore couldn’t move it, it was reduced in price and sold off fairly quickly. The fact that he remained outside literary industry circles did him great harm financially. But paying worship to these tinpot gods — a behavior he observed everywhere as he moved from place to place — simply disgusted him. In this way, he thought, a writer reduced himself to a boot-polisher. Yes, he knew, times had changed. But this left him cold. When one approaches sixty, one sees things from a different perspective. His own books were written just as a farmer sows and mows, feeds his cattle and spreads manure. That is, from a sense of duty and to have something to eat. “To me, it was work like any other.”

His most productive periods as a writer were his seven years in Berlin and the following seven years he spent in Biel. There, no one pressured him and no one controlled him. His talent matured in tranquility, like an apple ripens on the tree. In society at large, the years following the First World War were a disgraceful period for most writers. Their works took on an ill-natured, malicious character. Today, literary works radiate love and well-being. Hatred has not proved an enduring force; it was ultimately counterproductive. However, it was at that time, in the midst of this orgy of gloom, that his artistic decline had begun. Every literary award went to a supposed savior or some pedagogue. Well, it was pointless to argue. But he would rather die than grovel to them. So cliquishness and nepotism ran their course.

Amid this conversation he commented admiringly on Dostoyevski’s The Idiot, Eichendorff’s Life of a Good-For-Nothing, and the manly and bold lyric poetry of Gottfried Keller. Rilke works, on the other hand, he characterized as sweets for spinsters. Of Jeremias Gotthelf he preferred the two Uli volumes; the others he found loud, unpolished, and preachy.

This first appeared at Wandering with Robert Walser.

This entry was posted in Robert Walser. Bookmark the permalink.