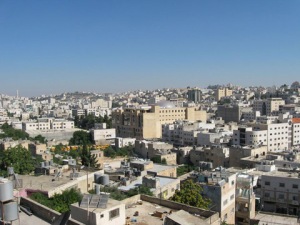 Hebron, the largest city in the West Bank.

FROM JERICHO TO HEBRON

I took a short day trip to Jericho several days ago; it was love at first sight. My friend and I were welcomed to the city with free bananas by friendly merchants who sold us fresh fruit from orchards within walking distance. Jericho is more like a big farm than a city. I had never been to a desert with so much green (it turns out Jews aren’t the only ones who can make a desert bloom). The air smelled like citrus and flowers; and in the late afternoon, a family sitting in their garden invited my friend and me for tea. We accepted after the requisite three refusals, and soon tea turned into supper, which turned into an invitation to stay the night that we couldn’t refuse.

The next morning I took a walk to the ruins of Hisham’s Palace, one of the city’s biggest attractions. The archeological site is beautiful, and the mosaics are extraordinary. I received a personal tour from a 1948 refugee working there, who said “the pleasure of my company” would be his payment.

I wondered why Jericho felt like such a different world from the rest of the West Bank, so relaxed, spontaneous, and open. Then it hit me: I hadn’t seen a jeep or heard a sound bomb my entire time there. There were no Humvees zooming past in the middle of the night, no soldiers demanding who I was and where I was going. Jericho is—almost—Palestine without the Occupation. And it is beautiful. It’s a vibrant reminder of what Palestine could—and hopefully someday will—be. Who says all Palestinians would rally against Israel if left alone? Nobody I met talked much about Israel while I was there. They were too busy living their daily lives, like most people in the world.

It takes just 2 hours to get from Heaven to Hell. At least, that’s how long it took for me to go the next morning from the paradise of Jericho to the nightmare of Hebron. Until recently, Hebron was the only city in the West Bank besides East Jerusalem suffering from settlements within its city limits. Usually settlers establish themselves on hills surrounding villages or cities, but many of the settlers in Hebron have moved into the second floors of Palestinian homes in the Old City, always by force and sometimes with the help of the army.

Hebron’s were the first settlers in the West Bank after Israel occupied the area in 1967, when the Old City’s Palestinian population was around 7,500. Twenty-five years later, that population had shrunk by 80% to 1,500, a mass exodus provoked by Israeli settler and state violence and dispossession. The wealth left with the refugees; only the poorest residents remain, those with nowhere else to go. Today the old market, which used to be bustling and vibrant, is run-down and abandoned. Unemployment hovers around 80%. The local economy is in shambles, as are the hopes of many Hebron residents.

I took a tour of the city led by Christian Peacemaker Teams (CPT), a faith-based organization that witnesses and intervenes nonviolently to prevent violence in Hebron and other hotspots around the world. We walked through the market area, where the few remaining Palestinian merchants have hung netting above their shops to catch trash that the settlers throw down from their apartments onto the Palestinians’ streets and rooftops. Said one merchant, “I’m not here to make money anymore. I just sit here because there’s nothing else for me to do. I’m waiting to die.” Even if his old customers had the money to spend, the merchant couldn’t get to his shop because it’s in the Old City, which is now cut off from the rest of the holy city of Hebron by a checkpoint. The people of Hebron can no longer go freely to their city center, nor to their main place of worship. I wonder how Israel would react if Palestinians started moving into the Jewish section of old Jerusalem by force, and then cut everyone off from it but themselves.

It doesn’t make sense. In a city of more than 120,000 Palestinians, there are about 600 settlers calling the shots, and about 2,000 soldiers and police stationed to protect them. In 1994, Baruch Goldstein, a local settler from New York affiliated with the Kach Israeli extremist political party, opened fire on a mosque full of praying Palestinians. He waited until they were bent over with their heads to the floor in worship before shooting 29 men to death, injuring about 100 more.

According to the imam who was present during the shooting, when the soldiers heard the shots they assumed they were from “Arab terrorists” and began to target Palestinian residents in retaliation, including one in the process of evacuating the body of a friend who had just been slaughtered. Riots following the massacre left 9 Israelis and 26 more Palestinians dead. Since the massacre, Hebron settlers have built a monument in Goldstein’s honor and make pilgrimages to his tomb.

The 1994 massacre was not the first Hebron has seen. In 1929, some 30 Jews were brutally murdered by Palestinians who resented their growing presence in Hebron. A native from Hebron named Hisham sometimes gives tours of the city, sharing little-known details about the time of the 1929 massacre, which he himself witnessed as a young boy. According to Hisham, before the massacre there was a large population of Jews in Hebron who considered themselves Arabs. They were well-integrated and respected in the community. As the Zionist movement gained ground, some people began to resent the huge influx of Jews flooding to Hebron with hopes of establishing an exclusivist Jewish state. Hisham said the vast majority of Jews killed in the massacre were recent immigrants from Europe, because most of the native Hebron Jews were saved by their Muslim neighbors who hid them in their homes.

Hisham’s family members, for example, were “shabbes goys” (non-Jews whom Jews hire to perform work that is forbidden for observant Jews on the Sabbath, such as switching lights on and off and cooking) for a Jewish family next door, whom they took in during the massacre. Hisham added that the majority of perpetrators of the massacre were not from Hebron.

It’s disappointing that these stories of Jewish and Palestinian solidarity are not more well-known. People remember the non-Jews who risked their lives to help Jews escape the Nazi Holocaust, but those who sheltered Jewish Hebron residents in 1929 are mostly forgotten. Similarly, the Arab media doesn’t go out of its way to talk about Israeli activists who risk attack and arrest every day for standing in solidarity with Palestinians against the Occupation. It seems the media on both sides have an interest in perpetuating fear and racism rather than taking advantage of the solidarity that has always existed here, albeit limited.

Although the native Palestinians in Hebron can be blamed for neither Goldstein’s massacre nor the one of 1929, they continue to pay the price for both. The earlier massacre is still used to justify excessive security measures at the expense of Palestinian freedom of movement and self-determination in Hebron. Ironically, Goldstein’s crimes are used to justify the same security measures. After he opened fire in the mosque, Palestinians in Hebron were put under curfew for a month (presumably to prevent retaliation), while the settlers were allowed to roam freely shortly afterwards. The Palestinians, who had been the target of the massacre, were shut in their homes for 30 days, unable to go to work or school, let alone visit one another and pay their respects to the dead.

Another result of the Goldstein massacre was that the site of the massacres—the Cave of the Patriarchs, where Hebron’s main mosque, the Ibrahimi Mosque, sits—was split into two, with one side for Muslims and one side for Jews. Both the curfew and the division were allegedly to prevent further confrontation, but in reality they served to further curtail the rights of the very population that had been attacked. The Israeli army and government call Goldstein’s gang terrorists, but in practice they are the group’s most crucial suppliers of security and impunity.

This piece was originally published on Anna Baltzer’s website: AnnaInTheMiddleEast.com on 3/12/05.

3 Responses to WITNESS IN PALESTINE