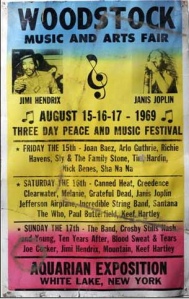 They travelled to Yasgur’s Farm alone and in pairs, by the dozens, hundreds, thousands—up to a half million strong the lyrics of a Joni Mitchell song later declared, roughly the number of American troops then in Viet Nam.  They were dreamers and hallucinators, hippies of every stripe, Beats and Yippies, nascent yuppies, draft dodgers, dopers, war vets, free‑lovers, bra burners, swamis, gurus, Buddhists and pseudo‑Buddhists, Hare Krishnas and tarot card fanatics, mainly white middle class children of U.S. America 1969, with only a sprinkling of people from other races, except on stage and backstage.  The waves of flower children, hayseeds, Jesus freaks, hillbillies, zonked out convicts on the lam, drug dealers, idealists, hopheads, idiots, geniuses, and droves of dreamy teenagers with guitars strapped on, flooded in from cities and towns and universities on fire with race war, cultural uprising, anti‑war demonstrations, pouring in from suburbs and farmlands, where life was boring in the context of national energy, dangled in stasis like tennis shoes tied together by the lace ends and tossed over power lines to swing in the weather.

Their mainly working class counterparts in Viet Nam were of less privileged stock, poorer and less educated on the whole, but more culturally diverse and no less interested in drugs, sex, and rock and roll.  Joyful Woodstock was a stellar moment caught in a universe of mud—in Viet Nam the same conditions would be called a world of shit.

There were, no doubt, undercover agents from the government at Woodstock, eyes peeled to figure out what was up, mixed with a few organizers and well‑meaning agitators from the left telling the crowds they should march on Washington instead of feeding music corporations, that what they were doing was all about product, profit, opiates for the masses, nothing more.

Don’t bum us out, man, lighten up, dig the sounds, be cool, go with the flow, don’t be a drag.  That was the mantra, so everyone got loaded and partied.

Richie Havens, bluesman cum folk singer, the first performer, rose to prominence that day, ripping a storm across acoustic guitar strings, pounding his way to the end;  buying time until the next act turned up, he set off wailing and improvised a riff on the word Freedom, making it up as he swirled himself and everyone into trance, lifting the masses off the ground, launching the Woodstock Nation.  Then Vietnam, the war (as opposed to Viet Nam the country, two words), leapt on stage and splashed one of its anthems across the land in the form of Country Joe and the Fish and their “I‑Feel‑Like‑I’m‑Fixin’‑to‑Die Rag” with its intentional mispronunciation of Vietnam:

What are we fighting for?

Next stop is Vietnam;

Open up the pearly gates,

Well there ain’t no time to wonder why,

The song took off like a rocket and was heard from Cau Mau Point, southernmost tip of the Mekong Delta, north through paddy dikes, cities, villages, camps and kill zones, all the way north to the DMZ, theoretical border of the United States of Viet Nam.

During days of rain and mud, celebration and misery, Crosby, Stills, Nash and Young floated to stardom, Santana kicked down Latino barriers and poured like a Río Grande into the cosmos, Janis Joplin raged like a doped‑up white Ma Rainey, and Creedence Clearwater Revival pounded out the same songs that were blasting from Japanese speakers all over occupied Viet Nam.  Yasgur’s Farm itself looked like a battlefield, the wreckage of hundreds of thousands of people swarming with primitive shelter, what food they could carry, mindful always of water.  Helicopters buzzed the place with supplies and rescue missions, just like in Viet Nam.  The most immediate differences were the lack of gun fire and explosions, and music as the focus instead of perceived enemies and death.

At one point Abbie Hoffman, Yippie messiah, cultural revolutionary, relentless protester of foul government, manic depressive, perennial rebel, anarchist, jumped on stage to protest the drug bust elsewhere of John Sinclair (leader of the White Panther Party) for nothing more than one marijuana joint.  Hoffman wanted to make wider points regarding social and political repression, but was clonked on the head with a guitar by a petulant Pete Townshend of The Who while the group played “The Acid Queen”:  Get the fuck off the stage, he screamed.  Vanity and the music corporations got their way.

Later that year, on trial for conspiracy as one of the Chicago Seven, when asked where he was from, Abbie Hoffman would tell another Hoffman, Federal Judge Julius Jennings Hoffman, he was a citizen of Woodstock Nation.  He was, in fact, a Founding Father, though a doubting one at first, one of those who thought rock festivals were tranquilizers of fascist‑leaning “Amerika,” a means for the establishment to distract and subdue its wild ass children bent on overthrowing the status quo.  But he mastered his doubts and embraced the Age of Aquarius.  Two decades later he would suicide on the powder from 150 caps of Phenobarbital mixed in a glass of Glenlivet scotch, partly the end stop of manic depression, partly a flag of frustration.

The Woodstock festival lasted three days that by all accounts felt like a month.  The Grateful Dead went psychedelic and tie‑dyed the air.  Joe Cocker, pop‑eyed and jerking like a man zapped by cattle prods, went passionately nuts.  Jimi Hendrix, ex‑Army Screaming Eagle 101st Airborne troop who either hurt his foot or claimed to be gay and was thereby miraculously discharged, played the only howling version of “The Star Spangled Banner” acceptable to the gathered tribes.  When he finally finished the reputedly longest set of his career, ending the festival, it was early morning—not many heard his last sounds because they were already headed down the road.  The deed was done.

The fields were littered with debris, with memories of drugs and orgies, loves and crushes, arguments and peace accords, mud and food, good and bad LSD, marijuana clouds, memories of  the Hog Farm commune feeding anyone who was hungry, Wavy Gravy talking down acid casualties, Joan Baez singing the lost and found and soul searching into tears, the Rainbow Cosmos om‑om‑ommmmming the world towards peace in a darkened time, levitating Woodstock Nation into love, unthinkable notion in a land of race riots, of police and guardsmen beating and gassing marchers, a land of free speech no more.  They left behind the wreckage of love in a world of napalm, massacres and carpet bombings—love, the forward looking badge and trope of the young, whose country is always the future, never conquered or destroyed.

Unknown at the time, Woodstock Nation was destined to be remembered partly as a gathering that forgot who was in charge beyond the cow guards of Yasgur’s Farm, a swarming loose‑knit group late to discover that power is relentless, a hand clamped on the throat.  Woodstock Nation would end its days strung out on not remembering, paying for how its force was stopped at the castle moat, stuck reveling because it could not understand (or remember to understand) real power.  The beaming youthful Nation fought hard a few more years, protesting mightily, but got bored again and lost interest as the war they hated withered and crawled to a stop, forced to its end by attrition under the glare and pressure of the corporate profit‑loss it caused.  Its citizens turned their attention instead (not all, but many) to the acquisitive habits they hated most about their parents, and naturally got caught up in the quotidian, haplessly condemning their own future children to the wars and plans that those in power beyond the Catskills would hand them like a pile of skulls on a plate.

On that last day of Woodstock, the sun rose the same over Yasgur’s Farm and Cam Rahn Bay (worlds away in Viet Nam on the white sand coast of the South China Sea).  Woodstock celebrants shook out their blankets and tents, Vietnamese fishermen shook out their nets, American GIs shook the night from their tortured heads, and the war they all were part of went on, many years and many deaths from over.

Woodstock and Vietnam (the war) were the light and dark of a generation, ying and yang as we used to say, and even if the times did not ultimately turn out well, surviving now only as a fading memory, it is at least a very rich memory, and, given current despairs and the human shift from reality to intangible cyberspace, that era, for all its faults, is like an ancient tale that will only get better with the telling.

—George Evans regretfully spent Woodstock in Viet Nam as an Air Force medic, tending wounded civilians and soldiers, but protesting the war.  This piece is an excerpt from a book in progress.